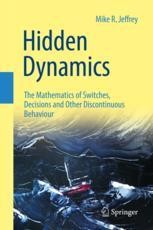 The Mathematics of Switches, Decisions and Other Discontinuous Behaviour

The dream of mathematical modeling is of systems evolving in a continuous, deterministic, predictable way. Unfortunately continuity is lost whenever the `rules of the game' change, whether a change of behavioural regime, or a change of physical properties. From biological mitosis to seizures. From rattling machine parts to earthquakes. From individual decisions to economic crashes.

Where discontinuities occur, determinacy is inevitably lost. Typically the physical laws of such change are poorly understood, and too ill-defined for standard mathematics. Discontinuities offer a way to make the bounds of scientific knowledge a part of the model, to analyse a system with detail and rigour, yet still leave room for uncertainty. This is done without recourse to stochastic modeling, instead retaining determinacy as far as possible, and focussing on the geometry of the many outcomes that become possible when it breaks down.

In this book the foundations of `piecewise-smooth dynamics' theory are rejuvenated, given new life through the lens of modern nonlinear dynamics and asymptotics. Numerous examples and exercises lead the reader through from basic to advanced analytical methods, particularly new tools for studying stability and bifurcations. The book is aimed at scientists and engineers from any background with a basic grounding in calculus and linear algebra. It seeks to provide an invaluable resource for modeling discontinuous systems, but also to empower the reader to develop their own novel models and discover as yet unknown phenomena.

“The style of the presentation is enthusiastic, highlighting that the field of study presented is promising. … In summary, the present book provides an extensive, detailed, and well-written presentation of the field of piecewise-smooth systems whose complete study will allow the interested reader to move from novice to professional.” (Jesús M. González-Miranda, Mathematical Reviews, October, 2019)

“Jeffrey’s book seems ideally suited for a masters-level sem-inar course in which students present the book chapter-by-chapter to each other. … I can definitely recommend Jeffrey’s book for anyone looking to learn more about nonsmooth dynamical systems. … this book is one little puzzle piece that might hopefully motivate mathematicians of various interests to refine and extend methods in the vibrant area of applied dynamical systems.” (Christian Kuehn, SIAM Review, Vol. 61 (3), September, 2019)