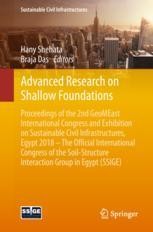 This volume deals with the advanced analysis of shallow foundations. Several research studies are considered including soil plasticity, cracking, reaching the soil bearing capacity, creep, etc. Dynamic analyses together with stability analysis are also discussed. It gives wide range of topics dealing with the shallow foundations in different parts of the world. The volume is based on the best contributions to the 2nd GeoMEast International Congress and Exhibition on Sustainable Civil Infrastructures, Egypt 2018 – The official international congress of the Soil-Structure Interaction Group in Egypt (SSIGE).

Dr. Hany F. Shehata is the founder and CEO of the Soil-Structure Interaction Group in Egypt “SSIGE.” He is a partner and vice-president of EHE-Consulting Group in the Middle East, and managing editor of the “Innovative Infrastructure Solutions” journal, published by Springer. He worked in the field of civil engineering early, while studying, with Bechtel Egypt Contracting & PM Company, LLC. His professional experience includes working in culverts, small tunnels, pipe installation, earth reinforcement, soil stabilization, and small bridges. He also has been involved in teaching, research, and consulting. His areas of specialization include static and dynamic soil-structure interactions involving buildings, roads, water structures, retaining walls, earth reinforcement, and bridges, as well as, different disciplines of project management and contract administration. He is the author of an Arabic practical book titled “Practical Solutions for Different Geotechnical Works: The Practical Engineers’ Guidelines.” He is currently working on a new book titled “Soil-Foundation-Superstructure Interaction: Structural Integration”. He is the contributor of more than 50 publications in national and international conferences and journals. He served as a co-chair of the GeoChina 2016 International Conference in Shandong, China. He serves also as a co-chair and secretary general of the GeoMEast 2017 International Conference in Sharm El-Sheikh, Egypt. 2016 Outstanding reviewer of the ASCE as selected by the Editorial Board of International Journal of Geomechanics.

Professor Braja Das is the Dean Emeritus of the College of Engineering and Computer Science, California State University, USA. He is a geotechnical engineering by profession and received his Ph.D. degree in 1972 from the University of Wisconsin, Madison, USA. For more than three decades, Professor Das has worked as a faculty member and in academic administration in several universities. He is a Fellow and Life Member of the American Society of Civil Engineers; Life Member of the American Society for Engineering Education; and Emeritus Member of TRB’s AFS-80 Committee on Stabilization of Geomaterials and Stabilized Materials.

Professor Das has published more than 300 papers in various journals and peer-reviewed conference proceedings. They are mostly in the areas of shallow foundations, earth anchors, and geosynthetics. He published some of the early founding studies on the bearing capacity of shallow foundations on geogrid-reinforced sand. His past editorial activities in geotechnical engineering journals include Editorial Board member of Journal of Geotechnical Engineering, ASCE (1988-1992); Lowland Technology International, Japan (1999-2007); Geotextiles and Geomembranes, Elsevier, UK (2008 – present). He was the Associate Editor of the International Journal of Offshore and Polar Engineering (1995-1998); and Co-Editor of Geotechnical and Geological Engineering, Springer (2001-2006). He is founder and Editor-in-Chief of the International Journal of Geotechnical Engineering (Taylor and Francis, UK) since 2007 up to the present.

Dr. Das has been a very popular keynote / or invited speaker in many conferences and special meetings in various countries. These countries include Mexico, Dominican Republic, Costa Rica, El Salvador, Peru, Colombia, Ecuador, India, University of Birmingham, UK, Korea, Bolivia, Venezuela, Turkey, Turkish Republic of North Cyprus, and Tunisia. He has been named as the first Eulalio Juárez Badillo Lecturer by the Mexican Society of Geotechnical Engineers (November 2016).

Professor Das is the author/co-author of several text and reference books in the area of geotechnical engineering, probably having written more than any other individual in geotechnical engineering. His textbooks have been translated into several languages and are used throughout the world. His clear, concise, and singularly-unique style of presentation is very much admired; thereby attracting many students over the last 25 years who might not have considered geotechnical engineering as a profession.

This is truly his most outstanding achievement which has endeared him to many young geotechnical engineers around the world. This is his legacy -- now and for years to come.