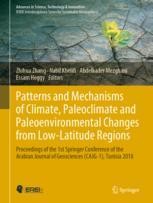 Patterns and Mechanisms of Climate, Paleoclimate and Paleoenvironmental Changes from Low-Latitude Regions

Middle East and Mediterranean region locates at a crossroad of global climatic patterns. The region is under the influence of a convergence of different maritime conditions which together with extensive adjacent land masses marked by extreme differences in topographical features transporting continental air masses lead to a diverse climate.

This edited volume is based on the best papers accepted for presentation during the 1st Springer Conference of the Arabian Journal of Geosciences (CAJG-1), Tunisia 2018. It gives new insights on patterns and mechanisms of past, present and future climate/environmental changes mainly on Middle East and Mediterranean region by international researchers. The book is of interest to all researchers in the fields of climate, paleo-climate and paleo-environmental studies.

​Prof. Zhihua Zhang is a full professor of climate change at Beijing Normal University, China. He has published more than fifty first-authored research articles and three first-authored Elsevier/Springer/DeGruyter monographs. Prof. Zhang has appointed as the associate editor/editorial board member of several ISI-JCR journals including Arabian Journal of Geosciences (IF=1.2), EURASIP Journal on Advances in Signal Processing (IF=1.9), PLoS One(IF=3.0), Journal of Cleaner Production (IF=5.7), and International Journal of Global Warming(IF=0.6).

Dr. Nabil Khélifi holds a B.Sc. in Natural Sciences (2001) and an M.Sc. in Earth & Environmental Sciences (2004). He received fellowships from START (2005) and DAAD (2006–2010) to continue with his Ph.D. studies in Marine Geosciences at the University of Kiel, Germany. After completing his Ph.D. in 2010, he received a postdoctoral research grant from the DFG to pursue his self-designed projects at GEOMAR Kiel, which involved reconstructing past changes in oceanography and climate in the North Atlantic and the Mediterranean Sea. He subsequently published his research findings in prominent scientific journals. Dr. Khélifi also received funding from ESF to co-organize two Workshops on Pliocene climate in Bordeaux, France (2009) and Bristol, UK (2013). In early 2014 he received the Swiss Government Excellence Scholarship to continue with his research at the ETH in Zurich, Switzerland. Although his interest in scientific research remained strong, in March 2014 he decided to pursue his career as a Senior Editor with Springer in Heidelberg, Germany. He is mainly responsible for developing Springer’s program in the Middle East & North Africa (MENA). The program currently consists of developing 18 academic journals and publishing numerous scientific books each year. Dr. Khélifi also helps researchers in MENA countries publish their work by delivering educational seminars for authors, reviewers, and journal editors to help improve their publication output and quality. He is also a Visiting Lecturer at the University of Carthage, Tunisia and King Saud University, KSA. Most recently, Dr. Khélifi was awarded the 2016 Africa Green Future Leadership Award in recognition of work contributing to sustainable development by advancing science and promoting publications in Africa and the Middle East. In 2017 Dr. Khélifi launched the first Springer conference dedicated to promoting the Euro-Mediterranean environmental integration.

Dr. Mezghani Abdelkader is a research scientist at the Climate and Model Analysis group, MET Norway. The main work at MET Norway has been on the development of new empirical-statistical climate downscaling methods and techniques that relates regional and global climate model results to local precipitation and temperature through generalized linear regression models. He acted as a MET leader in CHASE-PL project (2014-2017). Currently, he is involved in the C3S DECM project by developing a prototype for COPENICUS services on how to evaluate Big-Data from climate model simulations. He is also the co-developer of a the 'ESD' R package which contains a set of libraries to visualise and downscale climate variables and parameters using advanced methods such as Empirical-Orthogonal Function (EOF), Principal Component Analysis (PCA) and Canonical Correlation Analysis (CCA). His research expertise has addressed three different scales: synoptic, regional, and local scales with a particular interest on the interactions and associated uncertainties between them. Before joining MET Norway, Dr. Mezghani received his Ph. D. in Environmental Sciences from the Swiss Federal Institute of Technology (EPFL, 2009). Before joining MET Norway, he worked as a as a Post-doc at the French National Centre for Scientific Research (CNRS, 2009-2012) working on site at the Hydro-meterology, Climate and Impact group at the university of Grenoble (LTHE, 2009). had various international contributions in the CLIMAT project (Switzerland-Luxembourg, 2007), the European SWURVE project (Switzerland, 2005), RIWER2030 (France, 2009), OFEN (Switzerland, 2008), and CONSECRU (Switzerland, 2006). Key research areas Climate Change - Downscaling of Climate information - Statistical Analyses - R shiny web applications for climate models' evaluation.

Dr. Essam Heggy is a Research Scientist at the Microwave Systems, Sensors and Imaging Lab (MiXIL), at the Viterbi School of Engineering at the University of Southern California and affiliate of the Rosetta project at the NASA Jet Propulsion Laboratory. Heggy obtained both his MSc. and Ph.D. respectively in 1999 and 2002 with distinguished honors from the Paris VI University in France (UPMC-Sorbonne). His research focuses on understanding water evolution in Earth’s arid environments as well as planetary surfaces using radar surface and subsurface characterization methods. His research particularly focuses on understanding volatile evolution in the North African Sahara and Arabian Peninsula, as well as Mars, the Moon, Jovian Icy satellites and Near-Earth Objects. His work involves probing structural, hydrological and volcanic elements in terrestrial and planetary environments using different types of radar imaging and sounding techniques as well as measuring the electromagnetic properties of rocks in the radar frequency range. He is currently a member of the science team of the MARSIS instrument aboard the Mars Express orbiter (2003-present), the Mini-SAR experiment aboard Chandrayaan-1, the Mini-RF experiment on board the Lunar Reconnaissance Orbiter (2008-present), the CONSERT radar experiment aboard the Rosetta mission (2004-present) and the WISDOM GPR onboard ExoMars 2020 Rover (2008 to Present). He also edited a special JGR-Planets (AGU) volume on terrestrial and planetary radars. He is on the founding editorial board of the Journal of Arctic Geoscience ARKTOS (Springer), Geosciences (MDPI), National Geographic and co-chaired several sessions in international conferences and workshops on terrestrial and planetary radar subsurface imaging including AGU, LPSC and IEEE meetings.