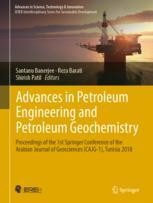 This edited volume is based on the best papers accepted for presentation during the 1st Springer Conference of the Arabian Journal of Geosciences (CAJG-1), Tunisia 2018. The book is of interest to all researchers in the fields of petroleum engineering, reservoir engineering and petroleum geochemistry. The MENA region accounts for more than 50 percent of the world's hydrocarbon reserves. Despite being the largest oil and gas producer of the world, the MENA countries face routine problems regarding petroleum engineering, reservoir modelling and production optimization. This volume offers an overview of the latest information and ideas regarding reservoir engineering, petrophysical engineering, petroleum system modelling, non-conventional energy resources and environmental impact of oil production.

Dr. Reza Barati Ghahfarokhi is an Associate Professor of Petroleum Engineering at the University of Kansas (KU). He earned his PhD in Chemical and Petroleum Engineering at KU in 2010 and worked for the Enhanced Oil Recovery Institute (EORI) in Wyoming before joining KU as a faculty in 2012. In addition to his academic career, Barati has extensively worked on several industry and state-funded projects as a consultant.  He has also worked as a visiting researcher with Schlumberger, Halliburton, and Kinder Morgan for nearly two years. Barati has authored or co-authored more than 40 technical papers. He has received several SPE awards including the 2012 Petroleum Engineering Junior Faculty Research Initiation Award, the 2015 SPE Faculty Innovative Teaching Award, and the 2017 SPE Reservoir Evaluation & Engineering Technical Editor Award for outstanding service. His research areas of interest include: enhanced water-flooding through modification of injection brine, CO2 EOR-mobility control, waterless/foam fracturing, EOR for shale oil, characterization of tight oil and gas reservoirs, and improvement of hydraulic fracturing fluids and proppants.

Dr. Santanu Banerjee holds a B.Sc. in Geology (1990) from Burdwan University, a M.Sc. in Applied Geology (1992) from the University of Allahabad and a PhD degree in Sedimentology (1997) from Jadavpur University, India. He is currently a Professor at Indian Institute of Technology Bombay, India. He has conducted a good number of research projects on Sedimentology and Stratigraphy of Indian sedimentary basins which include both Precambrian and Phanerozoic. Along with his collaborators he has attempted a correlation of Precambrian sedimentary successions across the world. He has also carried out several research projects sponsored by oil companies. His research interests include microbial mat structures in Precambrian siliclastics, origin of glauconite, Sequence Stratigraphy and Petroleum Geology. He has published more than 55 papers in indexed refereed journals, contributed for several book chapters and edited a book. He is currently the International Councilor and country Ambassador of Society for Sedimentary Geology (SEPM). In 2014 Dr. Banerjee joined the AJGS as an Associate Editor responsible for evaluating submissions in Sedimentology and Petroleum Geology.

Society of Petroleum Engineering (SPE) Distinguished Member, Shirish has received numerous awards from SPE and is also a recipient of two of the University of Alaska Fairbanks (UAF) highest awards, Distinguished Alumnus Award and Emil Usibeli Distinguished Service Award. Currently, he serves as Engineering Accreditation Commission (EAC) Commissioner for the Accreditation Board for Engineering and Technology (ABET) and on the Board of Directors for the SPE Middle East Region.