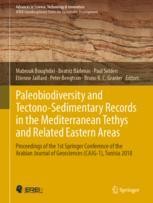 This edited volume contains the best papers accepted for presentation during the 1st Springer Conference of the Arabian Journal of Geosciences (CAJG-1), Tunisia 2018. The volume shares the latest results from paleontological, biostratigraphic and sedimentological studies by experienced researchers mainly from research institutes in the Mediterranean and Middle East. Main topics include: paleontology, biostratigraphy, sedimentology, paleoclimatology and geomorphology. Some new insights are given on paleobiodiversity and major biological tools for biostratigraphy, patterns, mechanisms and processes of meso-cenozoic sedimentation in the Mediterranean and Middle East. In particular, case studies are included to highlight the major controlling factors of Tethyan biosphere-geosphere interactions as inferred from the Mediterranean and Middle East regions. The book is of interest to all researchers in the fields of different disciplines involved in the sedimentary geology.

Dr. Bádenas holds a five-year B.Sc. in Geology (1991) and a Ph.D. degree in Stratigraphy (1999) from the University of Zaragoza (Spain). She is currently a Professor of Stratigraphy and Sedimentology at the Earth-Science Department of the University of Zaragoza. Her research interests mainly focus on sedimentology and sequence and cyclostratigraphic analyses of marine carbonate sediments, with special emphasis on sedimentary processes and facies heterogeneities of tidal flat-lagoonal facies, shallow-platform coated-grains sandbodies and carbonate buildups, and hemipelagic rhythmites and black shales. She is currently working in a multidisciplinary research project on the palaeoenvironmental and paleoclimatic reconstructions of the Jurassic and Cretaceous in the Iberian plate. She has co-published near 100 research articles in international indexed and refereed journals. Since 2011, she is member of the editorial and scientific committees of the journals edited by the Geological Society of Spain. In 2016 Dr. Bádenas joined the AJGS as an Associate Editor responsible for evaluating submissions in the fields of Stratigraphy and Sedimentology.


Dr. Granier holds a B.Sc. in Sedimentary Geology (1981) from P. Sabatier University, Toulouse (France), a M.Sc. in Geodynamics (1983), a Ph.D. in Stratigraphy (1987) as well as a D.Sc. (Habilitation) in Earth Sciences (2003) from Sorbonne University – UPMC, Paris (France). Before joining academe, he worked over a decade and a half for the oil industry. In 1991, he joined Total as Senior Carbonate Sedimentologist at its Scientific and Technical Research Centre in Saint-Rémy-lès-Chevreuse (France). There, he coordinated studies on Angola and Libya, and was responsible for carbonate studies on France, Qatar and Yemen. In 1995 he was seconded to ADMA-OPCO in Abu Dhabi (United Arab Emirates), as a Petrography Expert. In 2001 he was back in Paris – La Défense with Total in the reservoir division where he dealt with the carbonate reservoirs of the Congo, Angola, ... along with the bituminous sands of Alberta. Since 2004, Dr. Granier is a full Professor and the Chairperson in Paleontology and Sedimentology at the University of Western Brittany – UBO, Brest (France). Since 2007, he is also an Adjunct Research Associate with the Department of Ecology and Evolutionary Biology at the University of Kansas in Lawrence (U.S.A.). Since 2011, he is a “Pesquisador Associado” with the UNESPetro at the “Centro de Geociências Aplicadas ao Petróleo” of the “Universidade Estadual Paulista” in Rio Claro – SP (Brazil). In summer 2015, he was awarded a Franco-Brazilian professorship at the UNESP. Since 2013, he is also an Adjunct Researcher at the Faculty of Sciences II – Fanar Campus of the Lebanese University in Beirut (Lebanon). Dr. Granier has authored or co-authored some 120 research papers and number of technical reports. He serves as an Editor or Associate Editor some journals such as PALAIOS, Carnets Geol. and Studia UBB. He is or was an active member of several not-for-profit associations (Emirates Society of Geosciences, French Geological Society, International Palaeontological Association, International Association of Sedimentology, …etc.) and also chaired invited sessions at international meetings. From 2007 to 2011, he was the Chair of the French Committee on Stratigraphy (CFS) and as such he organized the International Congress STRATI2010 in Paris on behalf of the CFS. Currently, he is still a Vice-Chair of the French Group on the Cretaceous (GFC). In 2016 Dr. Granier joined the AJGS as an Associate Editor responsible for evaluating submissions in the fields of Stratigraphy, Sedimentology, Carbonate Reservoir Geology and Micropaleontology.

Dr. Jaillard is senior researcher at the French « Institut de Recherche pour le Développement » (IRD). He is specialized in sedimentary geology, and uses it for understanding continental margins and their geodynamic setting. He worked about 5 years in the Western Alps, 20 years in the Andes, and since 15 years, he studies sedimentation, tectonics and paleoenvironments in North Africa. He is the author of about 70 international publications, and contributed to the redaction of several books.


Dr. Selden gained the B.Sc. (Hons) degree in Geology and Zoology in 1975. He then went up to the University of Cambridge, Darwin College, where he achieved a Ph.D. in 1979, working with Prof. Harry Whittington. His career has been in university teaching, first (1979–1981) at the University of London, Goldsmiths’ College, then at the University of Manchester (1981–2005). He left the latter institution (as Reader in Palaeontology in the School of Earth, Atmospheric and Environmental Sciences) and joined the Natural History Museum in London as a Scientific Associate (and now hold an Honorary Research Fellowship there). In 2007, he started a new position as Distinguished Professor in Invertebrate Paleontology and Director of the Paleontological Institute, at the University of Kansas, USA. His research interests are in fossil arthropods, mainly Chelicerata. Dr. Selden has served as Vice President of the Palaeontological Association and the Palaeontographical Society, President of the British Arachnological Society, International Society for Arachnology, and the Manchester Geological Association. He has also served as Editor of Palaeontology, and presently serves as Editor of the Treatise on Invertebrate Paleontology, Paleontological Contributions, and Arachnology, and as Associate Editor for PALAIOS. In 2016 Dr. Selden joined the AJGS as an Associate Editor responsible for evaluating submissions in the fields of Palaeontology.

Dr. Bengtson studied Historical Geology, Paleontology, Sedimentology, Stratigraphy, Mineralogy and Chemistry at Uppsala University in Sweden and at “Universidade Federal do Rio Grande do Sul” in Porto Alegre, Brazil. He holds a B.Sc. (1969) and a M.Sc. (1974) in Geology, and a Ph.D (1977) and a D.Sc. (1978) in Historical Geology and Palaeontology from Uppsala University. From 1975 to 1989 he was employed by Uppsala University as a Research Associate, Assistant Professor and Associate Professor. From 1990 until his retirement in 2010 he worked at Heidelberg University in Germany as a full Professor of Paleontology. At Uppsala and Heidelberg he has been teaching mainly Invertebrate Paleontology and Biostratigraphy and led field courses in the marine Cretaceous of Brazil, Germany, France, and Ukraine, the Lower Paleozoic and Mesozoic of Sweden, and the Neoproterozoic to Lower Palaeozoic of Newfoundland, Canada. From 1975 to 1985 he was Project Secretary of IGCP Project 58 “Mid-Cretaceous Events” (MCE) and from 1995 to 2001 he was Co-Leader of IGCP Project 381 “South Atlantic Mesozoic Correlations” (SAMC). During 1978–1980 he was Editor-in-Chief of the journal Geologiska Föreningens i Stockholm Förhandlingar (GFF), Co-Editor of the newsletter MCE News (1975–1985), Co-Editor of the newsletter SAMC News (1995–2001), and Co-Editor of the journal Gaea heidelbergensis (1995–2011). From 1981 to 1982 he served as a board member of the European Life Science Editors association (ELSE) after he contributed to its creation. From 1980 to 1990 he was in the editorial board of the journal Cretaceous Research and since 2000 in the editorial board of the journal Revista Brasileira de Paleontologia. From 1995 to 2000 he was Chairman of the Turonian Working Group of the International Subcommission on Cretaceous Stratigraphy, voting member of the German Subcommission for Cretaceous Stratigraphy (1996–2006), voting member of the International Subcommission on Cretaceous Stratigraphy (1998–2006), and board member of the German National Committee for the IGCP (2000–2006). He has organized and co-organized 15 international conferences. Dr. Bengtson’s principal research interests are Cretaceous palaeontology, biostratigraphy and biogeography with focus on marine Mollusca of the Southern Hemisphere, geological and palaeontological terminology and nomenclature, and stratigraphic principles and procedures. He has carried out extensive field work in Brazil, Sweden and Antarctica and has further field experience from Norway, Denmark, Germany, Austria, the Czech Republic, England, France, Italy, Spain, Portugal, Greece, Ukraine, Georgia, Gabon, Canada, Argentina and Colombia. He has published and co-authored more than 230 original articles, monographs, text-books, edited books, special issues, and conference abstracts. In 2016 Dr. Bengtson joined the AJGS as an Associate Editor responsible for evaluating submissions in the fields of Biostratigraphy, Invertebrate Macropalaeontology and Palaeoecology.