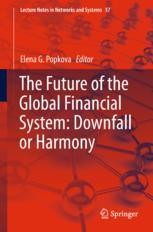 The Future of the Global Financial System: Downfall or Harmony

This book gathers the best papers presented at the conference “The Future of the Global Financial System: Downfall or Harmony”, which took place in Limassol, Cyprus on April 13-14, 2018. Organized by the Institute of Scientific Communications (Volgograd, Russia), the conference chiefly focused on reassessing the role and meaning of the global financial system in the modern global economy in light of the crisis that began in 2008 and can still be observed in many countries, and on developing conceptual and applied recommendations on spurring the development of the global financial system.

All works underwent peer-review and conform to strict criteria, including a high level of originality (more than 90%), elements of scientific novelty, contribution to the development of economic science, and broad possibilities for practical application. The target audience of this scientific work includes postgraduates, lecturers at higher educational establishments, and researchers studying the modern global financial system. Based on the authors’ conclusions and results, readers will be equipped to pursue their own scientific research.