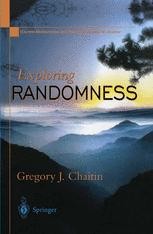 In The Unknowable I use LISP to compare my work on incompleteness with that of G6del and Turing, and in The Limits of Mathematics I use LISP to discuss my work on incompleteness in more detail. In this book we'll use LISP to explore my theory of randomness, called algorithmic information theory (AIT). And when I say "explore" I mean it! This book is full of exercises for the reader, ranging from the mathematical equivalent oftrivial "fin­ ger warm-ups" for pianists, to substantial programming projects, to questions I can formulate precisely but don't know how to answer, to questions that I don't even know how to formulate precisely! I really want you to follow my example and hike offinto the wilder­ ness and explore AIT on your own! You can stay on the trails that I've blazed and explore the well-known part of AIT, or you can go off on your own and become a fellow researcher, a colleague of mine! One way or another, the goal of this book is to make you into a participant, not a passive observer of AlT. In other words, it's too easy to just listen to a recording of AIT, that's not the way to learn music.

"In this book on algorithmic information theory, the author compares his concept of randomness (for recursive functions) which is based on the complexity (length) of the generating algorithm (program) with other concepts (by Martin-Löw, Solovay) and discusses its relation to incompleteness and the halting problem. Algorithms (needed for proof) are described in a (small) dialect of LISP. The style mostly is that of a lecture, lively and readable." (P. Schmitt, Monatshefte für Mathematik, Vol. 141 (1), 2004)

"Chaitin is the main architect of a new branch of mathematics called algorithmic information theory, or ‘AIT’. … in Exploring Randomness, he develops algorithmic theory, further revealing its technical core. This is important work, with implications that go far beyond the arcane arguments of one branch of mathematics. … As one gets to the substance … it is difficult to resist Chaitin’s enthusiastic style and obvious intelligence. Beyond the technicalities of the argument, the reader is quickly drawn into a fundamental new landscape of ideas." (Jacques F. Vallee, Journal of Scientific Exploration, Vol. 16 (4), 2002)

"Chaitin’s latest three books form a nice triangular base to support and explore the concepts underlying algorithmic information theory (AIT) – a clever blend of Gödel, Turing, and Shannon that Chaitin developed in his late teens … . this set of three volumes packages the material in a nice, quite digestible fashion … . Chaitin’s results demonstrate that not only there is no structure to foundation of mathematics, the foundation is in fact random." (The Mathematica Journal, April, 2002)

"The book is devoted to a Lisp formalism for exploring the basic ideas, concepts and results on program-size complexity and random sequences. The book contains a wealth of exercises, ranging from the ‘mathematical equivalent of finger warm-ups for pianists’ to substantial programming projects, from open questions to questions the author cannot even formulate. Highly recommended to anyone interested in understanding algorithmic information theory through programming." (Cristian S. Calude, Zentralblatt MATH, Vol. 963, 2002)

"This book uses LISP to explore the theory of randomness, called algorithmic information theory (AIT). This is the third of Chaitin’s book … . The common theme of the books is the study of H(x), the size in bits of the smallest program for calculating x … . Each book has a different emphasis. This book gives a detailed discussion of the metamathematical implications of these ideas and presents the technical core of Chaitin’s algorithmic theory." (Book News on the Internet, October, 2001)

"This is revolutionary, explosive stuff. … Chaitin challenges readers to follow his lead and forge their own path into the black hole of randomness, the ‘darkness at the edge of mathematics’. When Chaitin wrote ‘explore’, he well and truly meant it. An exhilarating, mind-blowing book from one of the great ideas men of mathematics and computer science." (Marcus Chown, New Scientist, January, 2002)