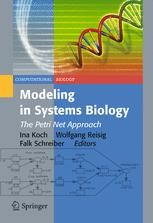 The emerging, multi-disciplinary field of systems biology is devoted to the study of the relationships between various parts of a biological system, and computer modeling plays a vital role in the drive to understand the processes of life from an holistic viewpoint. Advancements in experimental technologies in biology and medicine have generated an enormous amount of biological data on the dependencies and interactions of many different molecular cell processes, fueling the development of numerous computational methods for exploring this data. The mathematical formalism of Petri net theory is able to encompass many of these techniques.

This essential text/reference presents a comprehensive overview of cutting-edge research in applications of Petri nets in systems biology, with contributions from an international selection of experts. Those unfamiliar with the field are also provided with a general introduction to systems biology, the foundations of biochemistry, and the basics of Petri net theory. Further chapters address Petri net modeling techniques for building and analyzing biological models, as well as network prediction approaches, before reviewing the applications to networks of different biological classification.

This unique guide to the modeling of biochemical systems using Petri net concepts will be of real utility to researchers and students of computational biology, systems biology, bioinformatics, computer science, and biochemistry.

Dr. Ina Koch is a Professor and holds the Chair of Bioinformatics at the Johann Wolfgang Goethe-University Frankfurt am Main, Germany.

Dr. Wolfgang Reisig is a Professor and holds the Chair in the Theory of Programming at the Humboldt University of Berlin, Germany.

“This volume brings together a variety of contributions showcasing the application of modeling biological and biochemical processes using Petri nets. … it can be used as a teaching aid, and have included exercises at the end of each chapter. … the volume is best seen as a roadmap to a variety of interesting uses of a modeling technique that is particularly geared to readers who already have some experience with mathematical modeling in biology.” (Sara Kalvala, ACM Computing Reviews, August, 2011)