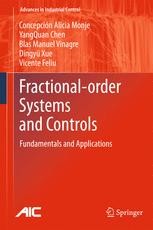 Fractional-order Systems and Controls details the use of fractional calculus (calculus of non-integer order) in the description and modeling of systems, and in a range of control design and practical applications. It is largely self-contained, covering the fundamentals of fractional calculus together with some analytical and numerical techniques and providing MATLAB® codes for the simulation of fractional-order control (FOC) systems (available by download from www.springer.com/ISBN). The use of fractional calculus can improve and generalize well-established control methods and strategies. Many different FOC schemes are presented for control and dynamic systems problems. These extend to the challenging control engineering design problems of robust and nonlinear control. Practical material relating to a wide variety of applications including, among others, mechatronics, civil engineering, irrigation and water management, and biological systems is also provided. All the control schemes and applications are presented in the monograph with either system simulation results or real experimental results, or both. Fractional-order Systems and Controls introduces its readers – academic and industrial control researchers interested in mechatronics, nonlinear and robust control, and applications fields from civil engineering to biological systems – to the essentials of FOC and imbues them with a basic understanding of FOC concepts and methods. With this knowledge readers can extend their use of FOC in other industrial system applications, thereby expanding their range of disciplines by exploiting this versatile new set of control techniques.

Doctor Concepción A. Monje has been working on fractional derivatives and their applications for over seven years being author and co-author of over 40 technical papers mostly related to fractional-order controllers. Her research area focuses on the tuning and auto-tuning of fractional-order controllers for the control of industrial processes, including servomechanisms, pneumatic and liquid level systems. She has collaborated with the CRONE (Commande Robuste Ordre Non Entier) team from the Ecole Nationale Supérieure d’Électronique, Informatique et Radiocommunications of Bordeaux, publishing several works related to the tuning of fractional-order controllers and co-organizing the 2nd IFAC Workshop on Fractional Differentiation and its Applications (FDA’06). She has also worked on the application of fractional-order controllers to the control of flexible manipulators, in collaboration with the Electrical, Electronic, Control and Communications Engineering Department of the Technic High School of Industrial Engineers of the University of Castilla La-Mancha, Spain. Her collaborations in this field also extend to the Center for Self-Organizing and Intelligent System of the Utah State University, in USA, where she was invited to deliver a research lecture on design of fractional-order controllers to Ph.D. students and a joint public lecture on this topic to members of the IEEE Control Systems Society San Diego Section. She has co-chaired international conferences and she has been a member of international program committees. She has been involved in several international and national research and industrial projects, and she has reviewed articles for several international journals and conferences of relevance. Doctor YangQuan Chen has authored over 200 academic papers plus numerous technical reports. He co-authored two textbooks: "System Simulation Techniques with MATLAB®/Simulink" (with Dingyu Xue . Tsinghua University Press, April 2002, ISBN 7-302-05341-3/TP3137, in Chinese) and "Solving Advanced Applied Mathematical Problems Using Matlab" (with Dingyu Xue. Tsinghua University Press. August 2004. 419 pages in Chinese, ISBN 7-302-09311-3/O.392); and four research monographs: "Plastic Belt for Projectiles" (with Y. Shi. Shaanxi Science and Technology Press, Jan. 1995, ISBN 7-5369-2277-9/TJ.1, in Chinese), "Iterative Learning Control " (with C. Wen . Lecture Notes in Control and Information Sciences, Springer-Verlag, Nov. 1999, ISBN: 1-85233-190-9 ), "Iterative Learning Control" (with Hyo-Sung Ahn and Kevin L. Moore. Springer, July 2007, ISBN: 978-1-84628-846-3), and "Optimal Observation for Cyber-physical Systems"(with Zhen Song, Chellury Sastry and Nazif Tas. Springer, July 2009, ISBN: 978-1-84882-655-7). His current research interests include autonomous navigation and intelligent control of a team of unmanned ground vehicles, machine vision for control and automation, distributed control systems (MAS-net : mobile actuator-sensor networks), fractional-order control, interval computation, and iterative/repetitive/adaptive learning control. Currently, he serves as an Associate Editor for IEEE Control Systems Society, Conference Editorial Board (CSSCEB ). He was also an Associate Editor of ISA Review Board for AACC 's American Control Conference ( ACC2005 ). He has been the Co-Organizer and Instructor of the Tutorial Workshop on "Fractional-order Calculus in Control and Robotics" at IEEE 2002 Conference on Decision and Control (CDC'02), and a founding member of the ASME subcommittee on "Fractional Dynamics". Doctor Blas M. Vinagre has been working on the area of Fractional Calculus Applications for over 12 years, and he has published over 60 technical papers on this subject. He co-organized the ever first whole day Tutorial Workshop (IEEE Conference on Decision and Control, Las Vegas, December 2002) and the Symposium on Applied Fractional Calculus (Badajoz, October 2007). He has been teacher for tutorial seminars and lecturer for talks on Fractional Calculus Applications at several universities: Technical University of Kosice (Kosice, Slovak Republic 1999), Universita degli Studi di Parma (Parma, Italy 2000), Technical University of Lisbon (Lisbon, Portugal 2001), University of Seville (Seville, Spain 1999), Polytechnic University of Madrid (Madrid, Spain 2004), University of Valencia (Valencia, Spain 2005), Royal Academy of Sciences (Madrid, Spain 2005), Polytechnic University of Catalunya (Barcelona, Spain 2008). He has also been Co-Chair of the 2nd IFAC Workshop on Fractional Differentiation and its Applications, Porto, Purtugal, July 2006. He is currently involved as Principal Investigator in research projects with the objective of applying FOC to industrial processes, servomechanisms, and autonomous vehicles, and his current interest in the field also includes stability theory, optimal and adaptive control, and implementation issues using FOC. Doctor Dingyü Xue is a Professor of Control Engineering on the Faculty of Information Sciences and Engineering at Northeastern University in Shenyang, China. He is the author of several influential textbooks and monographs on MATLAB® and control in Chinese and two in English, cited by thousands of journal papers and theses. Doctor Vicente Feliu’s research interests include multivariable and digital control systems, fractional dynamics and control, kinematic and dynamic control of rigid and flexible robots, mechatronics, and computer vision for robots. He has written about 80 technical papers in refereed international journals and more than 100 communications to international conferences about these subjects. He was awarded with the prize to the best paper published in the Pattern Recognition Journal in 2001, with the Highly Commended Award by the Industrial Robot Journal in 2007, and with the Highly Commended Award by the CLAWAR Conference in 2006. He was also awarded with the Prize to Technical Innovation of Castilla-La Mancha (Spain) in 2003. He has also hold some leading jobs in the Spanish National Research Agency. Regarding fractional calculus, he has worked on modelling and identification of electrochemical and corrosion processes using fractional derivatives, and in the development of frequency domain control design techniques with applications to robotics, mechatronics, hydraulic canals, and electronic converters.