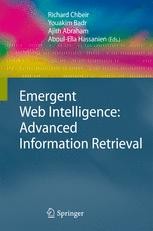 This Volume provides reviews of cutting-edge technologies and insights into various topics related to XML-based and multimedia information access and retrieval under the umbrella of Web Intelligence, it also illustrates how organizations can gain competitive advantages by applying new techniques in real-world scenarios. The 18 chapters are arranged in three parts and have identified several important problem formulations in the area of Web and multimedia information querying, modelling user interactions and advanced information security and access control models. Chapters are authored by reputed scientists in the field and all articles are self-contained to provide the greatest reading flexibility.

Richard Chbeir received his Ph. D in Computer Science from the INSA DE Lyon-France in 2001. He has been a member of IEEE and ACM since 1999. He is currently an Associate Professor in the Computer Science Department of the Bourgogne University, Dijon-France. His research interests are in the areas of distributed multimedia database management, XML similarity and rewriting, spatio-temporal applications, indexing methods, and multimedia access control models. Dr. Chbeir has published (more than 40 peer-reviewed publications) in international journals and books (IEEE Transactions on SMC, Information Systems, Journal on Data Semantics, Journal of Systems Architecture), conferences ( ER, WISE, SOFSEM, EDBT, ACM SAC, Visual, IEEE CIT, FLAIRS, PDCS) and has served on the program committees of several international conferences (SOFSEM, AINA, IEEE SITIS, ACM SAC, IEEE ISSPIT, EuroPar, SBBD). He has been organizing many international conferences and workshops (ACM SAC, ICDIM, CSTST, SITIS). He is currently the Vice-Chair of the ACM SIGAPP and the Chair of its French Chapter.

Youakim Badr has a Doctorate in Information Systems from the French National Institute for Applied Sciences in Lyon (INSA-Lyon). In 2004, he joined the faculty of the INSA of Lyon as Assistant Professor of Computer Science. He teaches in both the Department of Computer Engineering and the Department of Industrial Engineering. He also contributes largely to the INSA’s new International Master Program in Information Systems and represents the Industrial Engineering Department abroad through his work in international relations.

Dr. Badr has worked extensively in the field of coupling XML documents and Object-Relational Databases. Through his research he has acquired skills in fields such as Interoperability, Modeling, System Architectures and Networking, and their application to various domains such as Business Processes, Supply Chains, Productions Systems, Virtual Enterprises and e-commerce. His current academic research interests include systems in both the service sector and ICT. In particular, he studies the ecosystem of services and the multidisciplinary modeling approach to design services through the integration of ICT, strategy and processes. He leads the Service-Oriented Enterprise research team which combines industrial and computer engineering approaches. In this context, he co-supervises several graduate students and actively participates in national and international projects.

Ajith Abraham received his Ph.D degree in computer science from Monash University, Melbourne, Australia. His research and development experience includes over 18 years in the Industry and Academia. He works in a multidisciplinary environment involving machine intelligence, network security, sensor networks, e-commerce, Web intelligence, Web services, computational grids, data mining, and applications to various real-world problems. He has given more than 30 plenary lectures and conference tutorials in these areas. He has authored or coauthored more than 500 publications. He works with the Norwegian University of Science and Technology, Norway and also coordinates the activities of Machine Intelligence Research Labs (MIR Labs), which has representation in 47 countries. He is the Co-Chair of the IEEE Systems Man and Cybernetics Society Technical Committee on Soft Computing. He is the founder of several conference series, which are now sponsored by IEEE and also serves the editorial board of over 30 editorial journals.

Aboul Ella Hassanien received his B.Sc. with honours in 1986 and M.Sc degree in 1993, both from Ain Shams University, Faculty of Science, Ain from the Department of Computer Science, Graduate School of Science and Engineering, Tokyo Institute of Technology, Japan. He is currently a Professor at Cairo University, Faculty of Computer and Information. He has authored/coauthored over 120 research publications in peer-reviewed reputed journals and conference proceedings. He serves on the editorial board and is a reviewer of a number of journals and he is also on the program committee of several international conferences and he has edited/written more than 18 books. He received the Excellent Young Researcher award from Kuwait University.

“The book is an edited volume of 18 chapters written by authors from all over the world … . Each chapter in each set is self-contained and has its own set of references. … a worthwhile contribution to the literature, as it assembles contemporary research on Web Intelligence. It deliberately targets a readership that ranges from new graduate students to experienced researchers, and is successful in meeting the interests and needs of its intended audience.” (Anthony J. Duben, ACM Computing Reviews, January, 2011)