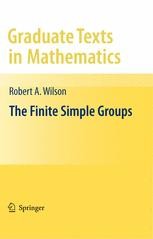 The finite simple groups are the building blocks from which all the finite groups are made and as such they are objects of fundamental importance throughout mathematics. The classification of the finite simple groups was one of the great mathematical achievements of the twentieth century, yet these groups remain difficult to study which hinders applications of the classification.

This textbook brings the finite simple groups to life by giving concrete constructions of most of them, sufficient to illuminate their structure and permit real calculations both in the groups themselves and in the underlying geometrical or algebraic structures. This is the first time that all the finite simple groups have been treated together in this way and the book points out their connections, for example between exceptional behaviour of generic groups and the existence of sporadic groups, and discusses a number of new approaches to some of the groups. Many exercises of varying difficulty are provided.

The Finite Simple Groups is aimed at advanced undergraduate and graduate students in algebra as well as professional mathematicians and scientists who use groups and want to apply the knowledge which the classification has given us. The main prerequisite is an undergraduate course in group theory up to the level of Sylow’s theorems.

“The book under review has as its main goal to give an introductory overview of the construction and main properties of all finite simple groups. … This book is the first one that attempts to give a systematic treatment of all finite simple groups, using the more recent and efficient constructions … . The author succeeds in making this important but difficult area of mathematics readily accessible to a large sector of the mathematical community, and for this we should be grateful.” (Felipe Zaldivar, The Mathematical Association of America, March, 2010)

“One of the great achievements of mathematics was the classification of the finite simple groups … . the book brings much information to the classroom. It contains exactly those things one would like to know if one were to meet the individual simple groups for the first time. … perfectly suitable for an advanced course or seminar. … accessible also to those who are not great experts in group theory. Anyone interested in finite groups … should have this book on his or her bookshelf.” (Gernot Stroth, Mathematical Reviews, Issue 2011 e)

“The author of this book has succeeded in giving an overview of all non-abelian finite simple groups which is accessible to non-experts. … For anyone who wants to get information on finite simple groups without having to tackle massive monographs this volume will be most welcome.” (Ch. Baxa, Monatshefte für Mathematik, Vol. 164 (3), November, 2011)

“It is the first text at this level in which all the finite simple groups are treated together, pointing out their connections. … The text is very well organised. The introduction, which forms the first chapter, contains a brief history and the statement of the classification theorem, together with sections giving remarks on the applications and the proof of the theorem. … Consequently the book may also be useful to a reader who just wants an introduction to a particular group or family of groups.” (Peter Shiu, The Mathematical Gazette, Vol. 95 (532), March, 2011)

“This book is a unique introductory overview of all the finite simple groups, and thus it is suitable not only for specialists who are interested in finite simple groups but also for advanced undergraduate and graduate students in algebra. The section entitled ‘Further reading’ at the end of each chapter is a nice guide to further study of the subjects.” (Hiromichi Yamada, Zentralblatt MATH, Vol. 1203, 2011)