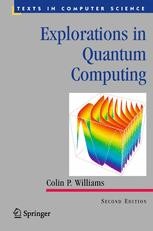 By the year 2020, the basic memory components of a computer will be the size of individual atoms. At such scales, the current theory of computation will become invalid.

“Quantum computing” is reinventing the foundations of computer science and information theory in a way that is consistent with quantum physics – the most accurate model of reality currently known. Remarkably, this theory predicts that quantum computers can perform certain tasks exponentially faster than classical computers and, better yet, can accomplish “impossible” feats such as teleporting information, breaking supposedly “unbreakable” codes, generating true random numbers, and communicating with messages that betray the presence of eavesdropping.

This widely anticipated second edition of Explorations in Quantum Computing explains the field from a fresh perspective, emphasizing lesser known quantum transforms, and practical applications of quantum algorithms and quantum information theory. The required mathematical machinery is developed systematically, and the students’ knowledge tested through several end-of-chapter exercises. This easy-to-read, time-tested, and comprehensive textbook provides a unique perspective on the capabilities of quantum computers, and supplies readers with the tools necessary to make their own foray into this exciting field.

This text/reference is ideal for anyone wishing to learn more about this incredible, perhaps “ultimate,” computer revolution.

“This book suggests that as computers decrease in scale, we should take a closer look at the relationship between the physical world in which computers live, and the theoretical aspects of what and how they compute. … This book is intended for graduate-level computer science students. … The book includes exercises at the end of each chapter. … The bibliography is extensive, demonstrating that the field has matured somewhat over time.” (William Fahle, ACM Computing Reviews, August, 2011)

“It is a truly impressive object, clearly a labor of love, and I learned a great deal in reading it. … I enjoyed reading this book. … Explorations in quantum computing is a good and useful entry in the growing pedagogical literature on quantum information. It is not the most tightly focused book, but it is full-to-bursting with interesting facts and discussions. The book is well written and interesting, and experts as well as newcomers to the field will enjoy dipping into it.” (Todd A. Brun, Mathematical Reviews, February, 2013)