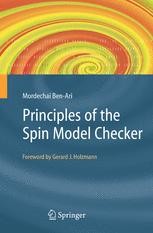 Principles of the Spin Model Checker

The Spin model checker is a widely used professional software tool for specifying and verifying concurrent and distributed systems. Models, written in a simple language called Promela, can be simulated randomly or interactively. Spin can generate efficient verifiers that search for a counterexample to correctness specifications applied to a model.

Spin is also a superb tool for teaching important concepts of computer science such as verification, concurrency and nondeterminism. The Promela language is easy to learn, as is the linear temporal logic used for correctness specifications, and the techniques for simulating and verifying models.

Principles of Spin is an introductory book for students and practicing software engineers who wish to learn Promela and Spin. The presentation starts with the verification of sequential programs and proceeds in gradual stages to the verification of concurrent and then distributed programs. Complete programs are used to demonstrate each construct and concept, and the source code of these programs, together with that of longer case studies, are available on the companion website.

Mordechai Ben-Ari is an associate professor in the Department of Science Teaching of the Weizmann Institute of Science. He is the author of numerous textbooks on concurrency, programming languages and logic, and has developed software tools for teaching concurrency. In 2004, Ben-Ari received the ACM/SIGCSE Award for Outstanding Contributions to Computer Science Education.