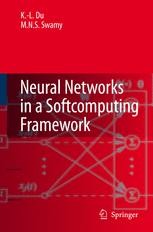 Neural Networks in a Softcomputing Framework

Conventional model-based data processing methods are computationally expensive and require experts’ knowledge for the modelling of a system; neural networks provide a model-free, adaptive, parallel-processing solution. Neural Networks in a Softcomputing Framework presents a thorough review of the most popular neural-network methods and their associated techniques.

This concise but comprehensive textbook provides a powerful and universal paradigm for information processing. Each chapter provides state-of-the-art descriptions of the important major research results of the respective neural-network methods. A range of relevant computational intelligence topics, such as fuzzy logic and evolutionary algorithms, are introduced. These are powerful tools for neural-network learning. Array signal processing problems are discussed in order to illustrate the applications of each neural-network model.

Neural Networks in a Softcomputing Framework is an ideal textbook for graduate students and researchers in this field because in addition to grasping the fundamentals, they can discover the most recent advances in each of the popular models. The systematic survey of each neural-network model and the exhaustive list of references will enable researchers and students to find suitable topics for future research. The important algorithms outlined also make this textbook a valuable reference for scientists and practitioners working in pattern recognition, signal processing, speech and image processing, data analysis and artificial intelligence.

Dr. K. -L. Du  received the B. Eng. degree from Tianjin University of Science and Technology in 1992, and the M.A.Sc. and Ph.D. degrees from Huazhong University of Science and Technology (HUST), China, in 1995 and 1998 respectively. From 1998, he was employed by Huawei Technologies, and then by China Academy of Telecommunications Technology (CATT), as a Research Engineer for wireless communications and signal processing. From 2000 to 2001, he served as the assistant computer officer (project manager) with Microwave and Communication Laboratory at The Chinese University of Hong Kong (CUHK) via 'Admission of Talents' Scheme of Hong Kong SAR.

Since Feb. 2001, he has been with the Center for Signal Processing and Communications at Concordia University, where he was first a post-doctoral fellow and is now a research associate. In the past, he has worked on various aspects of wireless communications, signal processing, neural networks, softcomputing, and robotics. Dr. Du was a coordinator for the 1998 International Conference on Artificial Intelligence for Engineering (ICAIE'98). He acts as reviewer for eight international journals. He is member of the IEEE. He has published 30 papers in referred international conferences and journals. His current research interests are in signal processing, neural networks, softcomputing, and wireless communications.

Dr. M.N.S. Swamy currently holds the Concordia (Tier I) Research Chair Professorship in Signal Processing and is also the Director of the Center for Signal Processing and Communications in the Department of Electrical and Computer Engineering at Concordia University, Montreal, Canada, where he served as the Chair of the Department of Electrical Engineering from 1970 to 1977, and Dean of Engineering and Computer Science from 1977 to 1993. He has published over 350 papers in high quality journals in the areas of circuits, systems and signal processing, and holds five patents. He is the co-author of two book chapters and three books: Graphs, Networks and Algorithms (New York, Wiley, 1981), Graphs: Theory and Algorithms (New York, Wiley, 1992), and Switched Capacitor Filters: Theory, Analysis and Design (Prentice Hall International UK Ltd., 1995). A Russian Translation of the first book was published by Mir Publishers, Moscow, in 1984, while a Chinese version was published by the Education Press, Beijing, in 1987.

Dr. Swamy is a Fellow of a number of professional societies including the Institution of Electrical and Electronic Engineers (U.S.A.), the Institute of Electrical Engineers (UK), the Engineering Institute of Canada, the Institution of Engineers (India), and the Institution of Electronic and Telecommunication Engineers (India). Presently, he is the Past-President of the IEEE CAS Society. He has served the IEEE-CAS Society in various capacities such as the President in 2004, President Elect in 2003, Vice-President (Publications) during 2000-2002, Vice President in 1976, Editor-in-Chief of the Trans. on Circuits and Systems-I during 1999-2001, Associate Editor of the Transactions on Circuits and Systems during 1985-87, Program Chair for the 1973 ISCAS, General Chair for the 1984 ISCAS, Vice-Chair for the 1999 ISCAS and a member of the Board of Governors of the CAS Society. He is also the Editor-in-Chief of the Journal Circuits, Systems and Signal Processing since 1999. He is the recipient of many IEEE-CAS Society awards including the Education Award in 2000, Golden Jubilee Medal in 2000, and the 1986 Guillemin-Cauer Best Paper Award.