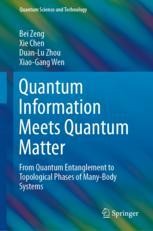 From Quantum Entanglement to Topological Phases of Many-Body Systems

This book approaches condensed matter physics from the perspective of quantum information science, focusing on systems with strong interaction and unconventional order for which the usual condensed matter methods like the Landau paradigm or the free fermion framework break down. Concepts and tools in quantum information science such as entanglement, quantum circuits, and the tensor network representation prove to be highly useful in studying such systems. The goal of this book is to introduce these techniques and show how they lead to a new systematic way of characterizing and classifying quantum phases in condensed matter systems.

The first part of the book introduces some basic concepts in quantum information theory which are then used to study the central topic explained in Part II: local Hamiltonians and their ground states. Part III focuses on one of the major new phenomena in strongly interacting systems, the topological order, and shows how it can essentially be defined and characterized in terms of entanglement.  Part IV shows that the key entanglement structure of topological states can be captured using the tensor network representation, which provides a powerful tool in the classification of quantum phases. Finally, Part V discusses the exciting prospect at the intersection of quantum information and condensed matter physics – the unification of information and matter.

Intended for graduate students and researchers in condensed matter physics, quantum information science and related fields, the book is self-contained and no prior knowledge of these topics is assumed.

Bei Zeng received the B.Sc. degree in physics and mathematics and M.Sc. degree in physics from Tsinghua University, Beijing, China, in 2002 and 2004, respectively. She received the Ph.D. degree in physics from Massachusetts Institute of Technology (MIT), Cambridge, Massachusetts, USA, in 2009. From 2009 to 2010, she was a postdoctoral fellow at the Institute for Quantum Computing (IQC) and the Department of Combinatorics & Optimization, University of Waterloo, Waterloo, Ontario, Canada. In 2010, she joined the Department of Mathematics & Statistics, University of Guelph, Guelph, Ontario, Canada, as an assistant professor, and promoted to Tenured Associate Professor in 2014 and Professor in 2018.

Xie Chen is an Associate Professor of Theoretical Physics at the California Institute of Technology. Dr. Chen obtained her Ph.D. degree from MIT in 2012 and was a Miller research fellow at the University of California, Berkeley for two years before joining Caltech in 2014. Dr. Chen is interested in studying quantum mechanical systems with a large number of degrees of freedom and how the constituent degrees of freedom cooperate with each other to realize amazing emergent phenomena, both at equilibrium and in dynamical processes. Dr. Chen was awarded the Sloan Research Fellowship and the NSF Faculty Early Career Award in 2017.

Duan-Lu Zhou is a Professor of physics at the Institute of Physics, Beijing National Laboratory for Condensed Matter, Physics, Chinese Academy of Sciences, and also teaches at University of Chinese Academy of Sciences. His main research interest is in quantum physics and quantum information, where he has published 70 academic papers. Xiao-Gang Wen is a theoretical condensed matter physicist, recognized for his work on introducing the notion topological order (1989) and developing the theories of this new class of quantum states of matter. He is known particularly for his theoretical discovery of perfect conducting 1D chiral Luttinger liquids, Z2 spin liquid with emergent fermion, non-abelian fractional quantum Hall states for topological quantum computation, symmetry protected topological order, and string-net unification of elementary particles and interactions. Since 2000, the study of topological states of matter slowly became a very active new field in condensed matter physics. Wen enter the graduate school of Princeton University in 1982, and earned a Ph.D degree in the field of superstring theory under Prof. Witten. During his postdoctoral period (1987-1989) in ITP, Santa Barbara, he started to pursue research in condensed matter physics. After a two-years stay in IAS, Princeton, he joined the faculty of department of Physics, MIT in 1991. He was a Distinguished Moore Scholar at Caltech (2006). Newton Chair at Perimeter Institute for Theoretical Physics (2012 – 2014). He was awarded Oliver E. Buckley Condensed Matter Prize by APS in 2017, and Dirac Medal by ICTP in 2018. He is a Cecil and Ida Green Professor of Physics at MIT since 2004, and became a member of National Academy of Science in 2018.

“Quantum information meets quantum matter is bound to hold an honored place on the bookshelves of many scientists for years to come.’ From myself, I would add that of students and PhD students, I do believe!” (Eugene Kryachko, zbMATH 1423.81010, 2019)