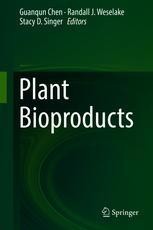 Among the major challenges facing society today, seeking renewable alternatives to petroleum-based fuels and manufactured goods is critically important to reducing society’s dependency on petroleum and tackling environmental issues associated with petroleum use. In recent years there has been considerable research targeted toward the development of plant-derived bioproducts to replace petrochemical feedstocks for both fuel and manufacturing. Plants not only provide a large amount of renewable biomass, but their biochemical diversity also offers many chemical and molecular tools for the production of new products through biotechnology.
Plant Bioproducts is an introduction to the production and application of plant bioproducts, including biofuels, bioplastics, and biochemicals for the manufacturing sector. Contributing authors examine various bioproducts with respect to their basic chemistry, relationship to current petrochemical-based products, and strategies for their production in plants. Chapters cover the integrated roles of agronomy, plant breeding, biotechnology, and biorefining in the context of bioproduct development. Environmental, economic, ethical, and social issues surrounding bioproducts, including the use of genetically modified crops, challenges to food security, and consumer acceptance, are also covered.

Guanqun (Gavin) Chen is an Assistant Professor of Plant Lipid Biotechnology in the Department of Agricultural, Food and Nutritional Science at the University of Alberta and an Adjunct Professor at the University of Manitoba from May 2017. He is well recognized for his contributions to the development of biotechnological strategies for producing specialty fatty acids and functional oils in microorganisms and plants. He received his Bachelor of biochemical engineering and MMaster of fermentation engineering at Tianjin University of Science & Technology (Tianjin China) and PhD in Plant Biotechnology at The University of Hong Kong (Hong Kong, China), respectively, and served as a postdoctoral researcher at the University of Alberta before he started his career at the University of Manitoba as an Assistant Professor (2015-2017), where he developed and taught a senior level course Plants for Industrial Uses. Gavin has rich research experience in applied microbiology, molecular biology, and lipid biotechnology and his work has been published in dozens of peer-reviewed papers.
Randall J. Weselake is a Professor Emeritus with the Department of Agricultural, Food and Nutritional Science at the University of Alberta (Edmonton, Alberta, Canada). Randall has over 30 years of experience in the in the biochemistry and molecular biology of storage lipid metabolism in oil crops and other oleaginous plant species. In addition, he has conducted research on lipid metabolism in yeast and livestock.  Randall held a Tier I Canada Research Chair in Agricultural Lipid Biotechnology at the University of Alberta from 2005 to 2016. During his tenure there, Randall developed and taught a senior level course dealing with plant bioproducts. From 2010-2016, Randall served as Scientific Director of the Alberta Innovates Phytola Centre which specialized in oilseed innovations, including research and development of industrial oil crops. In addition, Randall was Leader (2007-2013) of the “Bioactive Oils Program”, funded by AVAC Ltd., and Co-leader (2006-2011) of the large-scale Genome Canada/Genome Alberta project “Designing Oilseeds for Tomorrow’s Markets”.  From 1989 to 2004, Randall was with the Department of Chemistry and Biochemistry at the University of Lethbridge (Alberta, Canada) where he served as Chair from 1996 to 1999. His doctoral research in plant biochemistry was conducted at the University of Manitoba and Grain Research Laboratory of the Canadian Grain Commission (both in Winnipeg, Manitoba, Canada). Randall previously served as Joint Editor-in-Chief of the American Oil Chemists’ Society (AOCS) Lipid Library, Associate Editor for Lipids and Editor for Biocatalysis and Agricultural Biotechnology. He has published extensively in refereed journals and books and is Editor of the book Teaching Innovations in Lipid Science which was published in 2007 by the Taylor & Francis Group of the CRC Press and the AOCS Press. He is also one of the Co-Editors of the book Industrial Oil Crops which was published by Elsevier/AOCS in 2016. Randall is a Fellow of both the AOCS and the International Society of Biocatalysis and Agricultural Biotechnology.
Stacy D Singer is a lead scientist with AAFC at the Lethbridge Research and Development Centre where her research focuses on the biotechnological improvement of forage crops using advanced molecular technologies. She received her bachelor’s and PhD degrees from the University of Regina, Canada. She was a postdoctoral research in plant related research in the USDA, Cornell University, and the University of Alberta. She has published dozens of peer-reviewed research articles in such high impact journals as Plant Physiology, Plant Journal, Plant, Cell & Environment, and Journal of Experimental Botany. She has rich experience in plant molecular biology and crop improvement and her research has contributed significantly to various areas of plant molecular biotechnology.