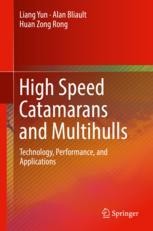 High speed catamaran and multihull high speed marine vessel have become very popular in the last two decades. The catamaran has become the vessel of choice for the majority of high speed ferry operators worldwide. There have been significant advances in structural materials, and structural design has been combined with higher power density and fuel efficient engines to deliver ferries of increasing size. The multihull has proven itself to be a suitable configuration for active power projection across oceans as well as for coastal patrol and protection, operating at high speedd for insertion or retrieval with a low energy capability. At present there is no easily accessible material covering the combination of hydrodynamics, aerodynamics, and design issues including structures, powering and propulsion for these vehicles. Coverage in High Speed Catamarans and Multihulls includes an introduction to the history, evolution, and development of catamarans, followed by a theoretical calculation of wave resistance in shallow and deep water, as well as the drag components of the multihull. A discussion of vessel concept design describing design characteristics, empirical regression for determination of principal dimensions in preliminary design, general arrangement, and methods is also included. The book concludes with a discussion of experimental future vehicles currently in development including the small waterplane twin hull vessels, wave piercing catamarans, planing catamarans, tunnel planing catamarans and other multihull vessels.

Professor Yun has more than 40 years’ experience at the Marine Design & Research Institute of China, Shanghai (MARIC). He graduated from the Shipbuilding Engineering Faculty of Da-Lian Polytechnic University in 1953 and completed a postgraduate diploma at the Military Engineering Academy of China in 1955. He has been involved in ACV development in China since the very first prototypes were constructed in Harbin in the late 1950’s, has been involved in design and prototype construction of WIG craft in the 1990’s, and development of both high speed catamarans and air cavity vessels through the millennium.

He was director of HPMV division, MARIC from 1983 to 1987 and Deputy Chief Naval Architect of MARIC from 1980 to 1997. He has been a Guest Professor supporting HPMV post graduate students in Harbin Engineering University, and Wu Han Water Transportation University in the early 1990’s.

Prof Yun has been Chairman of HPMV Design subcommittee of the China Society of Naval Architecture and Marine engineering, CSNAME over the last 20 years, as well as a vice chairman of the organizing committee of the annual International HPMV Conference, Shanghai, China since 1996.

He continues to play an active role in promotion and development of HPMV technology in China through his association with the industry and Chinese Universities.

Professor Yun has partnered with Alan Bliault on three textbooks covering ACV, WIG, and HPMV technology prior to the current volume on multihull vessels.

Alan Bliault​
A Naval Architect and Offshore Engineer, Alan is a Fellow of the Royal Institution of Naval Architects and graduated from the University of Newcastle upon Tyne. His initial career was at Vosper Thornycroft working with design and operation of hovercraft and air cushion platforms. Subsequently he worked in the offshore industry developing new offshore loading systems. He was responsible for hydrodynamic design for Conoco Hutton field Tension Leg Platform in the UK and subsequently at Norske Shell for Draugen Platform substructure mechanical outfitting, hydrodynamics, tow-out and installation in Haltenbanken.In the mid 1990’s he led development of new API and ISO standards for subsea flexible flowlines and risers based in Holland. Through the millennium he led Shell International’s development of the Floating LNG production system for remote gas fields. Since that time he has held various project management, construction, and R&D roles. He has worked as a senior auditor in Shell’s central Internal Audit group evaluating risk and management controls at major projects and operating companies worldwide from 2013 to 2016.He has maintained a close interest in high speed marine craft throughout his career and this led to his partnership with Liang Yun on engineering text books including the present volume on Multihull Vessels.

Huan-Zong also has over 40 years’ experience at the Marine Design & Research Institute of China, Shanghai (MARIC). He graduated from Department of Mathematics, Fudan University, majoring in Mechanics in 1967. As an engineer in the Ship Hydrodynamic Laboratory, MARIC, he worked on calculation of wave resistance and ship form improvement by using wave-making theory and wave pattern analysis.

In 1982 he received a postgraduate Diploma at China Ship Research and Development Academy, based on his work in marine hydrodynamics, and received an M.Sc. degree from Shanghai Jiao Tong University in 1983

Huan-Zong became Professor, Principal Engineer, and Consultant at the ship design technology national engineering centre, MARIC from 1997 to 2012 working on a computer based hull form generation and hull form design system using NURBS technique, a ship power estimation system, and a ship damage stability calculation system, all based on Windows.