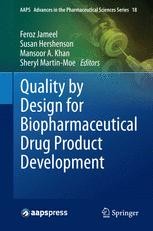 This volume explores the application of Quality by Design (QbD) to biopharmaceutical drug product development. Twenty-eight comprehensive chapters cover dosage forms, liquid and lyophilized drug products. The introductory chapters of this book define key elements of QbD and examine how these elements are integrated into drug product development. These chapters also discuss lessons learned from the FDA Office of Biotechnology Products pilot program. Following chapters demonstrate how QbD is used for formulation development ranging from screening of formulations to developability assessment to development of lyophilized and liquid formats. The next few chapters study the use of small-scale and surrogate models as well as QbD application to drug product processes such as drug substance freezing and thawing, mixing, sterile filtration, filling, lyophilization, inspection and shipping and handling.

Later chapters describe more specialized applications of QbD in the drug product realm. This includes the use of QbD in primary containers, devices and combination product development. The volume also explores QbD applied to vaccine development, automation, mathematical modeling and monitoring, and controlling processes and defining control strategies. It concludes with a discussion on the application of QbD to drug product technology transfer as well as overall regulatory considerations and lifecycle management. Quality by Design for Biopharmaceutical Drug Product Development is an authoritative resource for scientists and researchers interested in expanding their knowledge on QbD principles and uses in creating better drugs.

Dr. Feroz Jameel is a Principal Scientist for Parenteral Product & Process Development at Amgen Inc., in Thousand Oaks, CA, where he is involved in the development, optimization, scale-up and transfer to manufacturing of biopharmaceutical products. Feroz received his Master’s degree in Pharmaceutics from the University of Delhi and his Ph.D in Pharmaceutics from the University of Connecticut. His publications include a co-edited book, several book chapters and more than 40 peer-reviewed manuscripts and presentations.  He has held multiple leadership positions at the American Association of Pharmaceutical Scientists (AAPS) including chair of the freezing and drying technologies group and lead of the industrial consortium for application of QbD to lyophilization. He is a recipient of two patents in lyophilization formulation and lyophiliztion process development.  Dr. Jameel has received several awards including the AAPS and Parental Drug Association’s Fred Simon Award for the best paper published in the Journal of Pharmaceutical Science and Technology. He has also chaired several symposia on the development of biological products.

Dr. Susan A. Hershenson is the Deputy Director of Chemistry, Manufacturing and Controls at the Bill and Melinda Gates Foundation, where her major responsibilities are to support the CMC development and drug delivery needs for therapeutic projects funded by the Foundation.  She has many years of experience in drug development, including biologics, small molecules, combination products and drug delivery systems. Prior to the Gates Foundation, she served as President of Pharmaceutical Transformations LLC, a consulting service for the pharmaceutical, biotechnology, drug delivery and related industries.  Her clients included a wide range of biotechnology, pharmaceutical and drug delivery companies, start-ups, venture capitals, university labs and non-profit organizations.  Before starting her own practice, she served in a number of positions in the biopharmaceutical industry, including Vice President of Pharmaceutical and Device Development at Genentech and Vice President of Pharmaceutics at Amgen. During her career, Dr. Hershenson has made significant contributions to the development and commercialization of numerous therapeutic products including BETASERON®, Stemgen®, Kepivance®, Aranesp®, Neulasta®, Sensipar®, Nplate®, Vectibix®, Prolia®, XGEVA® and Nutropin AQ NuSpin® and has supported the development of numerous clinical candidates. She received her Ph.D. in Biochemistry from Yale University and held a postdoctoral fellowship in the laboratory of Dr. Robert Stroud at the University of California, San Francisco.  Dr. Hershenson publishes and teaches actively and serves on multiple scientific advisory boards.

Dr. Mansoor A. Khan is the Director of Product Quality Research and a Senior Biomedical Research Scientist at the Center for Drug Evaluation and Research at the Food and Drug Administration (FDA), where he overseas research teams on biotech products, chemistry and stability, drug delivery systems and bioavailability/bioequivalence. Prior to joining the FDA, he was a Professor of Pharmaceutics and Director of the graduate program in the School of Pharmacy at Texas Tech University Health Sciences Center. He is a registered pharmacist and earned his Ph.D. in Industrial Pharmacy from the St. John's University School of Pharmacy. He has published more than 255 peer-reviewed manuscripts, four texts, 25 book chapters, 200 poster presentations, and more than 175 invited presentations worldwide. He has held several leadership positions at the American Association of Pharmaceutical Scientists (AAPS) including elected chair of pharmaceutics and drug delivery (PDD) and the founding chair of formulations design and development (FDD).  He serves on the editorial board of Pharmaceutical Technology, the International Journal of Pharmaceutics, AAPS PharmsciTech, and Drug Delivery and Translational Research.  He has received the AAPS Research Achievement Award in Formulations Design and Development and is an AAPS Fellow.

Dr. Sheryl Martin-Moe is an Executive Vice President at Enterprise Catalyst Group in Palo Alto, CA, where she consults for biotechnology, pharmaceutical and related companies and serves on scientific advisory boards. She has managed the development of more than 90 diverse drugs and combination products. She received her Ph.D. in Cell Biology from the University of Vermont and was a postdoctoral fellow in Biochemistry at the University of California, Berkeley. She worked at Sterling Drug in its research division and held management positions in various Development and Operation areas at Centocor, Bayer, and Genentech and was most recently Global Head of Pharmaceutical Development at Novartis Biologics in Basel, Switzerland. Her publications include two patents, two book chapters and 21 publications and invited presentations, including a publication that won the Parenteral Drug Association’s Fred Simon Award. Dr. Martin-Moe was a member of the CMC Biotech Working Group and co-authored its A-Mab case study for QbD.