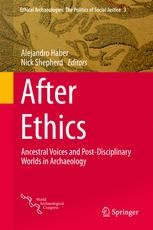 While books on archaeological and anthropological ethics have proliferated in recent years, few attempt to move beyond a conventional discourse on ethics to consider how a discussion of the social and political implications of archaeological practice might be conceptualized differently. The conceptual ideas about ethics posited in this volume make it of interest to readers outside of the discipline; in fact, to anyone interested in contemporary debates around the possibilities and limitations of a discourse on ethics. The authors in this volume set out to do three things. The first is to track the historical development of a discussion around ethics, in tandem with the development and “disciplining” of archaeology. The second is to examine the meanings, consequences and efficacies of a discourse on ethics in contemporary worlds of practice in archaeology. The third is to push beyond the language of ethics to consider other ways of framing a set of concerns around rights, accountabilities and meanings in relation to practitioners, descendent and affected communities, sites, material cultures, the ancestors and so on.

Nick Shepherd is Associate Professor of African Studies and Archaeology at the University of Cape Town and Head of the African Studies Unit. He was founding editor of the journal Archaeologies: Journal of the World Archaeological Congress. In 2004-5 he was based at Harvard University as a Mandela Fellow. In 2008 he was a Visiting Professor at Brown University, and in 2009 at the University of Basel. He has published widely on questions of archaeology and society in Africa and on questions of public history and heritage. His books include the volume Desire lines; space, memory and identity in the post-apartheid city (Routledge 2007, with Martin Hall and Noeleen Murray) and New South African keywords (Jacana Media-Ohio University Press, 2008, with Steven Robins).

Alejandro Haber is Titular Professor at the Universidad Nacional de Catamarca and Independent Researcher at the Consejo Nacional de Investigaciones Científicas y Técnicas, San Fernando del Valle de Catamarca, Argentina. He has been researching the theoretical and methodological assumptions of the archaeological discipline from different approaches, including sociology, history and philosophy of archaeology. He is regionally specialized in the South Central Andes, and has conducted research in the same area for decades. He is particularly interested in challenging Western assumptions as codified within the archaeological discipline while developing wider conversations with local and Quechua-Aymara epistemes, within the poscolonial context of frontier expansion. His recent work develops a no-methodology as un-disciplined archaeology. He is co-editor of the Arqueología Suramericana – Arqueología Sul-Americana, published in Spanish and Portuguese. His recent books include Hacia una arqueología de las arqueologías sudamericanas (Uniandes, Bogotá, Colombia, 2004), Domesticidad e interacción en los Andes meridionales (Unicauca, Popayán, Colombia, 2008) and La casa, las cosas y los dioses (Encuentro/Humanidades, Córdoba/Catamarca, Argentina, 2012). Recent publications in the English language include papers on intercultural archaeology (World Archaeology 39:2, 2007), on animism and post-Western perspectives (Cambridge Archaeological Journal 19:3, 2009), on WAC and globalized science (with Nick Shepherd, Public Archaeology 10:2, 2011) and on Un-disciplining Archaeology (Archaeologies 8:1, 2012).