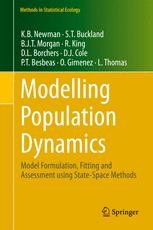 This book gives a unifying framework for estimating the abundance of open populations: populations subject to births, deaths and movement, given imperfect measurements or samples of the populations. The focus is primarily on populations of vertebrates for which dynamics are typically modelled within the framework of an annual cycle, and for which stochastic variability in the demographic processes is usually modest. Discrete-time models are developed in which animals can be assigned to discrete states such as age class, gender, maturity,  population (within a metapopulation), or species (for multi-species models).

Ken Newman is a mathematical statistician for the United States Fish and Wildlife Service. His primary research interest is in the use of state-space models to model the population dynamics of fish and wildlife to answer scientific questions and to serve as management decision support tools.

Stephen Buckland is Professor of Statistics at the University of St Andrews, and is also Co-Director of the UK National Centre for Statistical Ecology. His interest in modelling population dynamics dates from a project to develop a decision support system for managers of red deer populations in Scotland in the 1990s.

Byron Morgan is Honorary Professorial Research Fellow in the University of Kent, and Co-Director of the National Centre for Statistical Ecology. He is interested in integrated population modelling, which accounts for data collected on different aspects of the demography of wild animals. A convenient component of this work is the use of state-space models for describing ecological time series.

Ruth King is a Reader in Statistics at the University of St Andrews. Her research interests include the development of population dynamics models and model fitting tools in both the classical and Bayesian frameworks. This particularly includes the application of hidden Markov (or state-space) models.

David Borchers is a Reader in Statistics at the University of St Andrews. His research involves developing general statistical models for estimating population density and distribution, integrating hidden state or latent variable models with various kinds of observation model.

Diana Cole is a Senior Lecturer in Statistics at the University of Kent. Her primary research is on parameter redundancy or identifiability of models used in statistical ecology.

Panagiotis Besbeas is a lecturer in the Athens University of Economics and Business, and also a part-time post-doctoral research associate within the National Centre for Statistical Ecology group in the University of Kent, Canterbury. His research includes integrated population modelling, recently including the importance of replication for error estimation, and new methods for measuring goodness of fit as well as for conducting model selection.

Olivier Gimenez is senior scientist in statistical ecology at the Centre National de la Recherche Scientifique (CNRS) in France. His main research interest is animal demography using hidden structure models with contributions to the coexistence of humans and animals.

Len Thomas is a Reader in Statistics at the University of St Andrews, and is Director of the Centre for Research into Ecological and Environmental Modelling, an inter-disciplinary research centre at the university. He has two main research interests: (1) use of computer-intensive methods, particularly particle filters, to fit and compare state-space models of wildlife population dynamics; (2) development of methods and software for estimating animal population size and density.