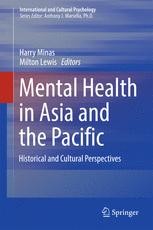 Mental Health in Asia and the Pacific

This far-reaching volume analyzes the social, cultural, political, and economic factors contributing to mental health issues and shaping treatment options in the Asian and Pacific world. Multiple lenses examine complex experiences and needs in this vast region, identifying not only cultural issues at the individual and collective levels, but also the impacts of colonial history, effects of war and disasters, and the current climate of globalization on mental illness and its care. These concerns are located in the larger context of physical health and its determinants, worldwide goals such as reducing global poverty, and the evolving mental health response to meet rising challenges affecting the diverse populations of the region. Chapters focus on countries in East, Southeast, and South Asia plus Oceania and Australia, describing:

·         National history of psychiatry and its acceptance.

·         Disparities in accessibility, service delivery, and quality of care.

·         Collaborations with indigenous and community approaches to healing.

·         Current mental health resources, the state of policy, and areas for intervention.

A welcome addition to the global health literature, Mental Health in Asia and the Pacific brings historical depth and present-day insight to practitioners providing services in this diverse area of the world as well as researchers and policymakers studying the region.

Harry Minas is Head of the Global and Cultural Mental Health Unit, Centre for Mental Health, Melbourne School of Population and Global Health, and Director of the Melbourne Refugee Studies Program, both at The University of Melbourne.  He is a psychiatrist who has worked in transcultural and global mental health over the past three decades. His mental health research, education and service development work has been in development of mental health services for multicultural communities in Australia and mental health system development in low-income and middle-income countries, and post-conflict and post-disaster settings in South-East Europe, Asia and the Pacific. He has had a particular focus on mental health and human rights, working with academic and government colleagues in several countries on improving human rights protections for persons with mental illness and psychosocial disabilities. At the University of Melbourne he has developed graduate diploma and master-level programs in transcultural psychiatry and global mental health and, through the International Mental Health Leadership Program, has trained several hundred mental health leaders in more than 20 countries in Asia and the Pacific.

Between 1988 and 2015 he was founding Director of the Victorian Transcultural Psychiatry Unit during which time he established, in 1996, the Centre for International Mental Health at the University of Melbourne. He has been a consultant to Australian Commonwealth and State Departments of Health, successive Australian Ministers for Immigration and Citizenship, the International Organization for Migration, and the World Health Organization. He was Co-Chair of the Victorian Migration Mental Health Taskforce and Chair of the Executive of the Commonwealth-funded Mental Health in Multicultural Australia program. He is Co-Director of a WHO Collaborating Centre for Mental Health and Substance Abuse and is a member of the WHO Director-General’s International Expert Panel on Mental Health. He was founding Editor of Australasian Psychiatry: Journal of the Royal Australian and New Zealand College of Psychiatrists (1993-2000) and, since 2007, has been founding Editor-in-Chief of International Journal of Mental Health Systems.  Between 2011and 2013 he was head of the Movement for Global Mental Health Secretariat and was a member of the Lancet Global Mental Health Group that prepared the Lancet Series on global mental health in 2007 and 2011.

Milton Lewis is an historian of medicine, public health and health policy; and is currently an Honorary Senior Research Fellow in the Menzies Centre for Health Policy, the Charles Perkins Centre, the University of Sydney.

As the book titles below show he has written on a very wide range of aspects of medicine and public health; across the lifecycle from infants to the dying and across a variety of medical specialties and health problems.

He has a long term interest in the contribution history can make to understanding better health problems and health policy; and, more broadly, in how to apply what used to be called, especially in 19th century Germany, the “human sciences” (history, anthropology, economics, politics, sociology and psychology) together with human biology, in an integrated way, to advance understanding of human affairs; a very much more difficult task but one essential to dealing with the growing complexity of a world where globalisation and the forces of economic “modernisation” interact with ancient cultures and “pre-modern” societies.

Some of his other books are:

RM MacLeod and MJ Lewis, eds, Disease, Medicine and Empire: Perspectives on Western Medicine and the Experience of European Expansion (1988);

MJ Lewis, S Bamber and M Waugh, eds, Sex, Disease and Society: A Comparative History of Sexually Transmitted Diseases and HIV/AIDS in Asia and the Pacific (1997);

MJ Lewis, Thorns on the Rose: the History of Sexually Transmitted Diseases in Australia in International Perspective (1998);

In 2013 he was interviewed for the National Oral History Archive, the National Library of Australia (since 1960 the Archive has recorded interviews with Australians who have distinguished themselves in the arts, sport, politics, the law, media, education and science) concerning his “outstanding and pioneering career as an historian of medicine and public health”.

“This wide-ranging collection advances a comprehensive overview of national approaches to the care of the mentally ill in the Asia–Pacific region … . The diversity of case studies and the coherency of its central themes make this collection a valuable contribution to the expanding literature on global mental health and the influence of culture and environment in shaping the practice of psychiatric medicine and the formulation of public health policy.” (Elizabeth Roberts-Pedersen, The Journal of Pacific History, Vol. 54 (1), 2019)

“This is a unique book, because of both its content and its approach. It goes without saying that it is an important book for mental health practitioners and administrators situated in Asia and the Pacific Islands and for medical historians and cultural anthropologists specializing in those regions. … I heartily recommend this unique volume to anyone who is remotely interested in cross-cultural psychiatry and who wants to view the world through a very different lens.” (Sharon Packer, metapsychology online reviews, metapsychology.mentalhelp.net, Vol. 21 (49), December, 2017)

“Mental Health in Asia and the Pacific is a groundbreaking text that examines culture and mental health through the lenses of etiology, treatment, research, and training, as well as policy making, regulation, and legislation. … Readers are provided with endemic perspectives to help them understand mental health issues across the various countries. … In conclusion, we applaud the contributors for taking on the huge task of covering such a diverse group with numerous countries, ethnicities, histories, religions, and languages.” (Kevin L. Nadal and Yizhu Zhou, PsycCRITIQUES, Vol. 62 (35), September, 2017)