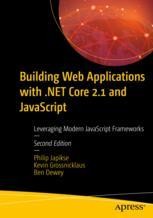 Roll up your sleeves and jump into building web applications using .NET Core 2.1 and the most popular JavaScript frameworks.

The second half of Building Web Applications with .NET Core 2.1 and JavaScript is dedicated to teaching you how to develop applications on the client with JavaScript, BootStrap, and related tooling such as TypeScript, WebPack, NPM, and more. Each JavaScript framework will build the same UI as the ASP.NET Core web application from the first half of the book, leveraging the same ASP.NET Core RESTful service and Entity Framework Core data access layer. Building the same UI in the different JavaScript frameworks provides the context and knowledge to reasonably compare and contrast the tools.

.NET architects, consultants, and developers who want to modernize their skill set. Some understanding of JavaScript and the Web is useful.

Phil Japikse is an international speaker, Microsoft MVP, ASPInsider, MCSD, PSM II, PSD, and CSM, and a passionate member of the developer community. He has been working with .NET since the first betas, developing software for over 35 years, and heavily involved in the agile community since 2005. Phil is co-author of best selling C# and the .NET 4.6 Framework (Apress) and Pro C# 7 (Apress), the Lead Director for the Cincinnati .NET User Group (cinnug.org), founded the Cincy Deliver Conference, (dayofagile.org), and volunteers for the National Ski Patrol. During the day, he works as the Director of Consulting and Chief Architect for a boutique consultancy in Cincinnati, Ohio, USA. Phil always enjoys learning new tech and striving to improve his craft. You can follow Phil on twitter @skimedic and read his blog at skimedic.com.

Kevin Grossnicklaus was, at one point in his career, the youngster on most development teams. He got his start developing with Visual Studio and managed .NET code during the early beta cycles in 2001. In 2009, he started his own software product development firm called ArchitectNow (architectnow.net). At ArchitectNow he and his team specialize in a wide variety of tools while delivering applications across a variety of cloud and mobile platforms. Born in rural Nebraska, Kevin has spent the last 20 years in St. Louis, Missouri where he lives with his wife Lynda and their three daughters: Alexis, Emily, and Hanna. He is an avid guitar player, fly fisherman, home brewer, and gamer (including everything from retro arcade games, to board games, to role playing games). When not spending time on any of those hobbies, he waits patiently for a second season of Firefly.
Ben Dewey is a former Microsoft MVP, and published author with over 18 years of experience writing applications and continually striving to create SOLID applications of the highest craftsmanship while paying special attention to clean user experiences (UX). He is currently Creative Director at Tallan, Inc. and consults regularly in New York City and around the country on web- and cloud-based technologies. He has also worked to deploy numerous high-quality, engaging apps to the Windows Store. When he’s not consulting, Ben is busy training, mentoring, blogging, and speaking at various conferences and community events around the country. Outside of work, he spends most of his time playing with his three young kids, working around the house, or, if it’s windy, kite surfing. You can find Ben online on Twitter (@bendewey), StackOverflow, GitHub, or on his blog at bendewey.com.