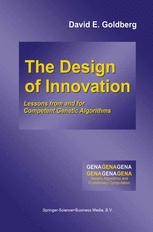 The Design of Innovation

Lessons from and for Competent Genetic Algorithms

advance praise:
"It is well known that "building blocks", whether they be the atoms of chemistry, the words of a language, or the modules of a computer, play a key role in our understanding of the world. However, it is hard to find an in-depth discussion of why this is so. It is even more difficult to find a guidebook for using building blocks to make the discoveries that extend science and engineering into new realms. David Goldberg uses his extensive experience with Genetic Algorithms to provide a superb guidebook for exploiting building blocks, combining relevant theory with carefully chosen examples. If you are a scientist or an engineer concerned with innovation, you should give this unique book a close reading."
(John H. Holland, University of Michigan)
"Dave Goldberg's first book, Genetic Algorithms in Search, Optimization, and Machine Learning, gave the field of genetic and evolutionary computation widespread attention among practicing engineers and researchers of machine learning and artificial intelligence. His latest effort, The Design of Innovation, is likely to transform the practice of all forms of genetic and evolutionary computation. For much of the last decade, theoreticians and practitioners have worked independently of one another. In this masterstroke of a book, Goldberg de-Balkanizes the field and bridges the chasm between theory and practice with his "little models," dimensional analysis, and "patchquilt integration." Not only does he show a clear path toward the principled design of scalable genetic and evolutionary computation, he suggests how these computations lead to a computational theory of the innovative. Much of what is presented is likely to be controversial, but whether you agree with him or not, Goldberg's arguments are first rate, and this book is a terrific read. I urge those interested in innovation in general or genetic and evolutionary computation in particular to buy this book and study it closely."
(John R. Koza, Stanford University)
"David Goldberg's treatise, The Design of Innovation, is unlike any other book in the vast literature on genetic algorithms and evolutionary computation. Its ambitious aim is to develop a coherent theory of design and innovation in the context of what the author calls competent GAs, that is, GAs that work well. But an even more ambitious aim is to use competent GAs as a platform for construction of computational models of innovation and creativity-concepts which are notoriously hard to formalize. One cannot but be greatly impressed by the many novel ideas which are presented in The Design of Innovation in a lively, insightful and reader-friendly style. The Design of Innovation is an original work which is a must reading for anyone who is interested in genetic algorithms, evolutionary computation and, more generally, in design and innovation. David Goldberg deserves our thanks and congratulations."
(Lotfi A. Zadeh, University of California, Berkeley)