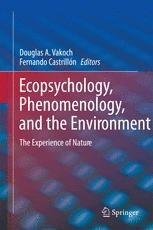 Ecopsychology, Phenomenology, and the Environment

The Experience of Nature

This book seeks to confront an apparent contradiction: that while we are constantly attending to environmental issues, we seem to be woefully out of touch with nature. The goal of Ecopsychology, Phenomenology and the Environment is to foster an enhanced awareness of nature that can lead us to new ways of relating to the environment, ultimately yielding more sustainable patterns of living. This volume is different from other books in the rapidly growing field of ecopsychology in its emphasis on phenomenological approaches, building on the work of phenomenological psychologists such as Maurice Merleau-Ponty. This focus on phenomenological methodologies for articulating our direct experience of nature serves as a critical complement to the usual methodologies of environmental and conservation psychologists, who have emphasized quantitative research. Moreover, Ecopsychology, Phenomenology and the Environment is distinctive insofar as chapters by phenomenologically-sophisticated ecopsychologists are complemented by chapters written by phenomenological researchers of environmental issues with backgrounds in philosophy and geology, providing a breadth and depth of perspective not found in other works written exclusively by psychologists.

Douglas A. Vakoch is Professor of Clinical Psychology at the California Institute of Integral Studies as well as Director of Interstellar Message Composition at the SETI Institute. His books cover fields ranging from psychology and ecocriticism to anthropology and space sciences and include Psychology of Space Exploration: Contemporary Research in Historical Perspective (NASA, 2011); On Orbit and Beyond: Psychological Perspectives on Human Spaceflight (Springer, 2012); Ecofeminism and Rhetoric: Critical Perspectives on Sex, Technology, and Discourse (Berghahn, 2011); Feminist Ecocriticism: Environment, Women, and Literature (Lexington, 2012); Altruism in Cross-Cultural Perspective (Springer, 2013); Extraterrestrial Altruism: Evolution and Ethics in the Cosmos (Springer, 2013); and Astrobiology, History, and Society: Life Beyond Earth and the Impact of Discovery (Springer, 2013). Dr. Vakoch serves as general editor for Lexington Books’ Ecocritical Theory and Practice Series and for Springer’s Space and Society Series. He also co-edited, with Fernando Castrillon, a special double issue of the peer-reviewed journal ReVision on ecopsychology. Prior to earning a Ph.D. in clinical psychology from the State University of New York at Stony Brook, he received an M.A. in history and philosophy of science from the University of Notre Dame, where he focused on contemporary continental philosophy of psychology. He may be reached at dvakoch@ciis.edu, telephone (415) 575-6244, Department of Clinical Psychology, California Institute of Integral Studies, 1453 Mission Street, San Francisco, CA 94103, USA; or at dvakoch@seti.org, telephone (650) 960-4514, Center for SETI Research, SETI Institute, 189 Bernardo Avenue, Mountain View, CA 94043, USA.

Fernando Castrillon, Psy.D., earned a masters in sociology from the University of California where he was a National Science Foundation Graduate Research Fellow, and a doctorate in clinical psychology from the California Institute of Integral Studies (CIIS) and is a licensed clinical psychologist. He is Associate Professor in the Community Mental Health Department at CIIS and is the founding Director of CIIS’ The Clinic Without Walls, an innovative psychotherapy clinic serving mostly working poor and immigrant communities who would otherwise not have access to mental health services.

Dr. Castrillon is also a candidate psychoanalyst with the Lacanian School of Psychoanalysis in Berkeley, California and has served on the editorial boards of the journals Ecopsychology and Universitas Psychologica, among others. His clinical, teaching and research interests include the production of subjectivity (both human and more-than-human) psychoanalysis, community mental health, ecopsychology, radical social theory, schizoanalysis, cosmology, entheogens, violent political movements, war, terrorism and revolution. With Doug Vakoch, he edited a special double issue of the peer-reviewed journal ReVision, entitled “Ecopsychology.” Dr. Castrillon maintains a private psychoanalytic practice in the San Francisco Bay Area. Address: California Institute of Integral Studies, 1453 Mission Street, San Francisco, California, 94103. He may be reached at (510) 295-4711 or view his webpage: www.drcastrillon.com.

"The collection of essays in Ecopsychology, Phenomenology, and the Environment: The Experience of Nature helps to expand the epistemological and methodological approaches that are so well suited for the interdisciplinary field of ecopsychology. Like many of its antecedents (e.g., Abram, 1996; Roszak, 2001; Roszak, Gomes, & Kanner, 1995; van Gennep, 1961), it will appeal to readers curious about the interplay of nature, consciousness, and psyche, and to those specifically interested in climate change, environmental ethics, public health, or phenomenological knowing...What I liked most about it, apart from some really beautiful writing, is its mature approach to suffering and the wildness of our nature, as part of the great chain of being. There is a cogent argument that we must address our sense of separateness from the world that holds us. I believe that readers will come away with an expanded sense of identity, and with a sense of calmness about what can be done and how one might go about contributing."
Barbara Landon
PsycCRITIQUES
November 10, 2014, Vol. 59, No. 45, Article 2