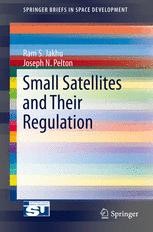 Small Satellites and Their Regulation

Since the launch of UoSat-1 of the University of Surrey (United Kingdom) in 1981, small satellites proved regularly to be useful, beneficial, and cost-effective tools. Typical tasks cover education and workforce development, technology demonstration, verification and validation, scientific and engineering research as well as commercial applications. Today the launch masses range over almost three orders of magnitude starting at less than a kilogram up to a few hundred kilograms, with budgets of less than US$ 100.00 and up to millions within very short timeframes of sometimes less than two years. Therefore each category of small satellites provides specific challenges in design, development and operations.

Small satellites offer great potentials to gain responsive, low-cost access to space within a short timeframe for institutions, companies, regions and countries beyond the traditional big players in the space arena. For these reasons (particularly the low cost of construction, launch and operation), small (micro, cube or nano) satellites are being preferred by students and educational institutions, amateur radio operators, small and developing countries, international aid agencies and most recently by defense agencies and satellite operators who are examining deployment of constellation clusters instead of conventional application satellites. In some cases these new capabilities are being deployed as hosted payloads on larger satellites. The advent of hosted payloads as a significant part of the satellite industry represents a key new topic that this book will address.

The number of small satellites—of various types--is increasing fast as their benefits are being realized. This short and unique interdisciplinary book, covering both technical and regulatory aspects, examines all the different types of applications and reasons for small as well as exploring technical and operational innovations that are being introduced. It also examines the new technical standards, removal techniques or other methods that might help to address current problems and the regulatory issues and procedures to ameliorate problems associated with small satellites, especially mounting levels of orbital debris and noncompliance with radio frequency and national licensing requirements, liabilities, export controls and so on.

Joseph N. Pelton, Ph.D., Principal of Pelton Consulting International. He currently serves as President of the International Space Safety Foundation and as a member of the Executive Board of the International Association for the Advancement of Space Safety. He is the former Chairman of the Board of Trustees and Vice President and Dean of the International Space University as well as the Director Emeritus of the Space and Advanced Communications Research Institute (SACRI) at George Washington University. Dr. Pelton also served as Director of the Accelerated Masters of Science Program in Telecommunications and Computers at the George Washington University from 1998 to 2005. Dr. Pelton was the founder of the Arthur C. Clarke Foundation and remains as the Vice Chairman on its Board of Directors.

Pelton is a widely published and award winning author with over 30 books written or co-authored or co-edited with colleagues. His book Global Talk was nominated for a Pulitzer and won the Eugene Emme literature award. Dr. Pelton is a full member of the International Academy of Astronautics, an Associate Fellow of the American Institute of Aeronautics and Astronautics (AIAA) and a Fellow of the International Association for the Advancement of Space Safety (IAASS). He was the Founding President of the Society of Satellite Professional International (SSPI) and a member of the SSPI Hall of Fame. For the last two years he has served as President of the Comsat Alumni and Retirees Association (COMARA). He received his degrees as follows: BS from the University of Tulsa, MS from the New York University and his doctorate from Georgetown University.

Prof. Ram S. Jakhu is an Associate Professor at the Institute of Air and Space Law, Faculty of Law, of McGill University in Montreal, Canada, where he teaches and conducts research in international space law, law of space applications, law of space commercialization, government regulation of space activities, law of telecommunications and Canadian communications law, and public international law.

He served as Director, Centre for the Study of Regulated Industries, McGill University, 1999-2004. He served as the First Director of the Masters Program of the International Space University, Strasbourg, France, 1995-1998. Dr. Jakhu authored a book, more than 60 articles and edited three books.

Dr. Jakhu chaired three international interdisciplinary congresses dealing with space debris mitigation, remediation and on-orbit serving and presented their reports to the United Nations Committee on Peaceful Uses of Outer Space. He is a Member of the Space Security Council of the World Economic Forum and a ‘Fellow’ as well as the Chairman of the Legal and Regulatory Committee of the International Association for the Advancement of Space Safety. In 2007, he received a “Distinguished Service Award” from the International Institute of Space Law for significant contribution to the development of space law. Dr. Jakhu holds Doctor of Civil Law (Dean's Honours List) and Master of Law (LL.M.) degrees from McGill University, Canada, as well as LL.M., LL.B., and B.A. degrees from Panjab University, India.