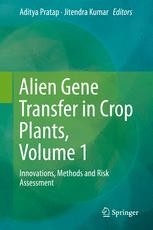 Genetic engineering and biotechnology along with conventional breeding have played an important  role in developing superior cultivars by transferring economically important traits from distant, wild and even unrelated  species to the cultivated varieties which otherwise could not have been possible with conventional breeding. There is a vast amount of literature pertaining to the genetic improvement of crops over last few decades. However, the wonderful results achieved by crop scientists in food legumes’ research and development over the years are scattered in different journals of the World. The two volumes in the series ‘Alien Gene Transfer in Crop Plants’ address this issue and offer a comprehensive reference on the developments made in major food crops of the world. These volumes aim at bringing the contributions from globally renowned scientists at one platform in a reader-friendly manner. The 1st volume entitled, ‘Alien Gene Transfer in Crop Plants: Innovations, Methods and Risk Assessment” will deal exclusively with the process and methodology. The contents of this volume have been designed to appraise the readers with all the theoretical and practical aspects of wide hybridization and gene transfer like processes and methods of gene transfer, role of biotechnology with special reference to embryo rescue, genetic transformation, protoplast fusion and molecular marker technology, problems such as cross incompatibility and barriers to distant hybridization and solutions to overcome them. Since wild and weedy relatives of crop plants may have negative traits associated with them, there are always possibilities of linkage drag while transferring alien alleles. Therefore, problems and limitations of alien gene transfer from these species will also be discussed in this series. Further, the associated risks with this and assessment of risks will also be given due weightage.

Dr. Aditya Pratap, born on October 18, 1976, is currently working as a Senior Scientist (Plant Breeding) in the Crop Improvement Division, Indian Institute of Pulses Research, Kanpur. He obtained his Master's and Ph.D. degrees in Plant Breeding and Genetics from CSK Himachal Pradesh Agricultural University, Palampur, INDIA in 1999 and 2003. Holding a brilliant academic and service record, he has been associated with crop research since last ten years and has worked on genetic improvement of crop plants including wheat, triticale, rapeseed-mustard, chickpea and Vigna species and has been instrumental in development of haploidy breeding protocol in cereals through chromosome elimination technique. He has been associated with the development and release of five crop varieties including two in rapeseed-mustard (RSPT2 and RSPR03), two in green gram (IPM 02-14 and IPM 02-3) and one in facultative winter wheat (Him Pratham) and registered two extra early maturing greengram genotypes (IPM 205-7 and IPM 409-4) while a few other varieties are in pipeline. His research interests include distant hybridization, doubled haploidy breeding, plant tissue culture, and molecular breeding. To his credit, he has about 100 publications which include research papers published in high impact Journals, technical bulletins, as well as reviews/chapters for best international publishers including Springer, Academic Press, CABI and CRC. He has published two books entitled, "Haploidy breeding in Triticale and triticale x wheat hybrids: Comparison of Anther Culture and Chromosome Elimination Techniques" by Lambert Academic Publishing, Germany and another on “Biology and Breeding of Food Legumes” published by CAB International, Oxfordshire, UK. He is also a recipient of the prestigious Norman E. Borlaug International Agricultural Science and Technology Fellowship. He is an acknowledged speaker and has several awards to his credit.

Dr. Jitendra Kumar, born in 1973, is presently working as Senior Scientist in the Division of Crop Improvement at Indian Institute of Pluses research, Kanpur. He has an excellent research career throughout. He secured Gold Medal during masters programme and pursued his Ph.D. in Genetics & Plant Breeding from G. B. Pant University of Agriculture & Technology, Pantnagar, India. He was awarded CSIR-Research Associateship during 2003-2005 for postdoctoral studies at the Institute of Integrative Medicine, Jammu (India). He has more than 12 years research experience in genetic improvement using both conventional and molecular marker assisted breeding approaches on various crops including medicinal and aromatic, cereal and pulse crops. During this period, he undertook study tours in Austria, Syria and Bangladesh. His research interests include conventional and molecular breeding, QTL analysis and marker assisted selection for crop improvement. He has about 80 publications including research articles in reputed national and international journals, reviews, book chapters, popular articles, meeting reports, bulletins, etc. He has also co-edited the book “Biology and Breeding of Food Legumes” published by CAB International, Oxfordshire, UK. He has been associated with development of a high yielding variety (IPL 316) of lentil and several others are in pipeline.  His current priorities include involvement of molecular marker technology in conventional lentil breeding programme for making genetic improvement towards the biotic and abiotic stresses.