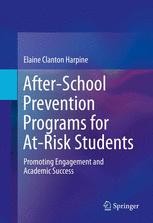 After-School Prevention Programs for At-Risk Students offers professionals a detailed framework for developing and enhancing after-school programs. Emphasizing a prevention focus and a group-centered interactive approach, the book's year-long model combines education and counseling, incorporating key therapeutic objectives to foster academic and behavior skills and reduce problems in and outside class. Practical step-by-step guidelines for creating and implementing programs include clear rationales, instructive design and case examples, and ready-to-use interventions. The author also provides guidance on developmental, gender, and cultural considerations, the challenges of maintaining progress over the course of the school year, and the handling of severe learning and emotional problems.

After-School Prevention Programs for At-Risk Students is an essential reference for scientist-practitioners, clinicians, and academics in such disciplines as school psychology, childhood education, social work, psychotherapy and counseling, and learning and instruction.

Dr. Clanton Harpine has published 14 nonfiction books, including Prevention Groups (2013), Group-Centered Prevention Programs for At-Risk Students (2011), Group Interventions in Schools: Promoting Mental Health for At-Risk Children and Youth (2008). And No Experience Necessary! which received an Award of Excellence in 1995 and was selected as one of the top five children’s books in its class. Other published children’s writings include a two volume series entitled, Come Follow Me, in 2001, a three-volume family series completed in 2003, a youth book in 1989 along with numerous articles for teenagers on peer pressure, coping with failure, alcohol abuse, parents, suicide, and more recently, articles on using group-centered interventions in the schools. Other published writings include a series on Erasing Failure in the Classroom, a series of ready-to-use group-centered program packets: Vol. 1, the Camp Sharigan program (2nd ed., 2010), Vol. 2, Vowel Clustering (2010), and Vol. 3, the Reading Orienteering Club (2013).

Her research for the past twelve years has focused on using group-centered interventions with at-risk readers. Dr. Clanton Harpine designed the motivational reading program called, Camp Sharigan, which she has used extensively in her work and research. She also designed the Reading Orienteering Club after-school prevention program and 4-Step Method for teaching at-risk children to read. Her research with these programs has been published in psychological journals and reported through presentations at the American Psychological Association's annual conventions.

In recent years, Dr. Clanton Harpine has been teaching Group Therapy and Counseling, Lifespan Development, and Human Growth and Development at the University of South Carolina Aiken and is continuing her research with group-centered prevention. She is the editor for the "Prevention Corner" column which appears quarterly in The Group Psychologist. She was selected for inclusion in Who’s Who of American Women, 2006-2013 for her work with children in inner-city neighborhoods and at-risk communities.

"This text is scholarly yet reader-friendly. It is written without jargon and addresses major issues which arise while working with an at risk population. Additionally, it effectively addresses multiple facets of group cohesion, cultural needs, multiple teaching strategies, along with many problems solving skills ... This book is especially helpful for the new professional or those just beginning to work in group settings."