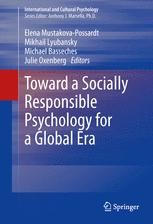 Toward a Socially Responsible Psychology for a Global Era

This book explores the concept of “socially-responsible psychology in a global age” and how it might be used to organize, integrate and bring enhanced focus a field that has the potential to contribute to solutions to the world’s most pressing problems. In this volume, the editors explore the central and defining features of socially-responsible psychology, challenges that this work would face, and the mechanisms and processes by which psychological work could be synergistically integrated with the work of other disciplines.  For this purpose, the volume also examines a variety of factors currently that limit psychology in carrying out this goal.

Elena Mustakova-Possardt, Ed.D., LPC, is an independent scholar and developmental psychologist in clinical practice in Arlington, VA. Former tenured Associate Professor of Psychology at University of West Georgia, she has published, lectured and taught widely, in cultures as diverse as Switzerland, Zimbabwe, United Arab Emirates, Bulgaria, and the U.S. She works with diverse forms of oppression worldwide and explores paths to cultivating an emancipated and truly liberated consciousness. Her re-thinking of moral development won the 1995 Dissertation Award of the Henry A. Murray Research Center for the Study of Lives at Harvard University, and the 1998 Outstanding Dissertation Award of the Association for Moral Education. Her book Ontogeny of Critical Consciousness: Study of Morality in a Global Age (Greenwood/Praeger 2003) was also published in Bulgarian (Sofia University Press 2004).  Her cross-cultural community development work with Latino immigrants won the Carter Award for Campus and Community Initiatives. She can be reached at elena.mustakova@gmail.com or at www.elenamustakova.net.

Mikhail Lyubansky, Ph.D., is a member of the teaching faculty in the Department of Psychology at the University of Illinois, Urbana-Champaign, where, among other courses, he teaches Psychology of Race and Ethnicity and a graduate-level restorative justice practicum based at a youth detention center. Since 2009, he has been a practitioner of Restorative Circles, a restorative practice developed in Brazil. In addition, Mikhail also has a long-standing interest in race and racial dynamics and writes a blog about race for Psychology Today called Between the Lines. Born in Kiev, Mikhail immigrated to the United States with his family as a child in 1977. He currently lives in Urbana, IL with his wife and two children, ages 5 and 10. He can be reached at Lyubanskym@gmail.com.

Michael Basseches, Ph.D., Professor, Department of Psychology, Suffolk University, is a life-span developmental and clinical psychologist whose academic and professional work has been devoted to conflict resolution. He has practiced psychotherapy since 1985.  He has published two books, Dialectical Thinking and Adult Development (Ablex, 1984), and (with Mascolo) Psychotherapy as a Developmental Process (Routledge, 2010). Michael has also taught on the faculties of Swarthmore College, Cornell University and Massachusetts School of Professional Psychology. Born in New York City, he is married to Angela Brandão, and has two sons, Joshua and Benjamin Basseches. He can be reached at mbasseches@gmail.com.

Julie Oxenberg, Ph.D., MALD, is a clinical psychologist with a master’s degree in International Diplomacy from the Fletcher School of Law and Diplomacy at Tufts University.  She is co-founder of Spiritual Psychology Associates, and serves on the Advisory Board of the Center for Psychotherapy and Spirituality at the Massachusetts School of Professional Psychology (MSPP). Founding member of the Psychology of Peace Initiative at MSPP, she has served on the New England and National Advisory Boards of the Tikkun Community associated with Tikkun Magazine. Julie is involved in several intercultural dialogue and conflict transformation procedures, including Beyond Words, an Israeli-Palestinian organization working with women in the Middle East, One by One, a Berlin-based organization working with dialogue processes between descendants of Holocaust survivors and descendants of Nazis, and the Public Conversations Project in Boston, MA. She can be reached at Julieoxenberg@gmail.com.

"Toward a Socially Responsible Psychology for a Global Era is a foray into an important and neglected territory. The authors are to be commended for their passion and dedication in bringing to bear the immense resources of Western psychology to attempt to lessen human degradation, enrich the world, and increase human dignity and freedom. ...This book will be of interest to all mental health professionals, students, and professors in the social sciences and laypeople concerned with the plight of our world in a challenging age. We should read it not as the final world on a complex topic but as part of an ongoing crucial conversation that we all need to participate in, deepen, and expand so that we can cocreate a more sustainable world and a viable future."
Jeffrey B. Rubin, PsycCRITIQUES
February 24, 2014, Vol. 59, No. 8, Article 1

"This scholarly treatment of profoundly human issues is a breath of fresh air. Although framed as an edited collection of independent essays, the book is obviously much more collaborative than is typical for a collection of scholarly articles organized around a theme. Many of the essays are co-authored by scholars who contribute to several pieces in the collection. The careful editorial work also contributes to this overall sense of a true conversation about critical topics. This provides a sense of continuity and real thematic organization that is unusual in scholarly collections. Having spent over thirty years reading scholarly collections of articles, most of which have the feeling of listening to a crowd of people having separate conversations on a subway--the same subway car being the theme--this collection offers a refreshing change. The contributors to the volume represent many strands of scholarly work and clinical practice in psychology. This integration of knowledge, practical wisdom, spiritually-informed reflection, and hands-on engagement in service to communities expresses the spirit of the "socially-responsible" in the title of this book.

TOWARD A SOCIALLY RESPONSIBLE PSYCHOLOGY FOR A GLOBAL ERA ALSO presents a much-needed integration of many dimensions in the human experience, which is lacking in many contemporary approaches to psychology. Arguing against fragmented models of the individualistic self, the authors in this work seek to illumine the profound extent to which individual health and global well-being are profoundly connected.

The book essentially offers a perspective on psychology that makes sense to a person, such as myself, who is not a psychologist by training. That we live in a global era is now beyond any reasonable denial. This globalization demands an disciplinary, collaborative, and cross-cultural analysis that takes into account a variety of phenomena that have no borders. Pressing global concerns, including intergroup conflict; rapid societal transformation, urbanization, and national development; threats to the natural environment; physical and mental health needs; the status of women; and the struggles of disempowered groups have profound psychological dimensions. Yet, much of contemporary discourse and analysis either completely ignores these psychological dimensions, or approaches them without reference to the complex interplay of culture, economics, history, politics, and religion; in other words, a multidisciplinary and transnational perspective. This book offers a welcome addition to the quest to understand the real psychological complexities of globalization and to explore the roots of socially-responsible behavior in our global era."