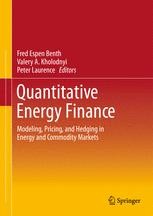 Modeling, Pricing, and Hedging in Energy and Commodity Markets

Finance and energy markets have been an active scientific field for some time, even though the development and applications of sophisticated quantitative methods in these areas are relatively new—and referred to in a broader context as energy finance. Energy finance is often viewed as a branch of mathematical finance, yet this area continues to provide a rich source of issues that are fuelling new and exciting research developments. Based on a special thematic year at the Wolfgang Pauli Institute (WPI) in Vienna, Austria, this edited collection features cutting-edge research from leading scientists in the fields of energy and commodity finance. Topics discussed include modeling and analysis of energy and commodity markets, derivatives hedging and pricing, and optimal investment strategies and modeling of emerging markets, such as power and emissions. The book also confronts the challenges one faces in energy markets from a quantitative point of view, as well as the recent advances in solving these problems using advanced mathematical, statistical and numerical methods. By addressing the emerging area of quantitative energy finance, this volume will serve as a valuable resource for graduate-level students and researchers studying financial mathematics, risk management, or energy finance.

Fred Espen Benth is professor in mathematical finance at the Center of Mathematics for Applications (CMA), University of Oslo. The last 10 years or so his research interests have been on mathematical finance, stochastics and energy markets. He has published more than 70 papers in scientific journals like Mathematical Finance, SIAM Journal of Financial Mathematics, Advances in Applied Probability, Operations Research,  Bernoulli, Stochastics, Energy Economics, Finance and Stochastics, Applied Mathematical Finance, Energy Journal, Jounal of Energy Markets and Journal of Derivatives. In addition, he has co-authored two research monographs on energy and weather markets, as well as an introductory book on mathematical finance. Benth obtained in 1995 his PhD in applied mathematics at the Universities of Mannheim and Oslo. After that, he spent three years as a statistical consultant at the Norwegian Computing Center, working for the Norwegian oil industry, before he returned to academia for positions in Aarhus, Trondheim and Oslo. Apart from teaching graduate courses on stochastic analysis and mathematical finance at the University of Oslo, Benth gives regularly courses for the energy, finance and insurance industry. Benth is scientific leader of two major research projects on energy and weather financed by the Norwegian Research Council, and a fellow of the Wolfgang Pauli institute. His administrative duties include being associate editor in SIAM Journal of Financial Mathematics, Mathematical Methods in Operations Research, Journal of Energy Markets and IMA Journal of Management Mathematics.

Valery A. Kholodnyi is a Principal Quantitative Analyst with Verbund Trading as well as a Pauli Fellow at the Wolfgang Pauli Institute. Prior to this, he was the Chief Science Officer and Vice President of Research and Development at Integrated Energy Services, Director of Research at TXU Energy Trading, Director of Quantitative Analysis at Reliant Resources, Managing Director of Quantitative Research and Risk Analytics at Platts, and Professor of Financial Mathematics and Risk Management as well as Executive Director of the Center for Quantitative Risk Analysis at Middle Tennessee State University. He has authored or co-authored four books, three book chapters, and over a hundred research papers in finance, mathematics, physics and engineering, and has published in journals such as the Journal of Derivatives Use, Trading and Regulation, Energy Power and Risk Management Magazine, Journal of Mathematical Physics, European Physical Journal, Journal of Nonlinear Analysis, Journal of Engineering Mathematics, Journal of Integral Equations and Applications, Journal of the Dynamics of Continuous, Discrete and Impulsive Systems and Journal of Bioelectrochemistry and Bioenergetics. He was an invited speaker at numerous international and national conferences both for the industry practitioners and academic researchers. He is a member of the editorial boards of the Journal of Energy Markets, Russian Journal of Risk Management, Journal of Nonlinear Analysis, and Journal of Mathematics in Engineering, Science and Aerospace. He is a recipient of the 15th Anniversary Outstanding Contribution to Energy Risk Award and the Pioneer Quant Honor by the Energy Risk Magazine. He holds a Ph.D. in Applied Mathematics from Moscow Institute of Electronics and Mathematics.

Peter Laurence is an associate Professor of Mathematics at the University of Rome, ”La Sapienza” and a visiting scholar at the Courant Institute. He completed his PHD in 1981 in applied mathematics at the University of Wisconsin, Madison after undergraduate courses at the Wharton School of Finance and Commerce and the University of Pennsylvania. He has published in leading international Journals in a large spectrum of areas in applied mathematics and of partial differential equations as well as in leading Math-Finance Journals like Risk Magazine, Energy Risk, Mathematical Finance, International Journal of Theoretical and Applied Finance, Quantitative Finance, Applied Mathematical Finance, Insurance Mathematics and Economics, European Journal of Finance. He first became interested in mathematical finance in 1997 and in 1999 co-authored with Marco Avellaneda a book on option pricing Quantitative Modeling of Derivative Securities. He has taught mathematical finance at the graduate level atNewYork University’s Courant Institute, Columbia University and at Universities of Rome I and II. To gain direct market experience, in 2001-2002 he was a consultant in Standard and Poor’s Risk Solutions group where he specialized in Portfolio Credit Risk. His most research focus has been on pricing and hedging basket options and asymptotic methods for stochastic volatility models. This year he is co-organizing (with Rene' Aid, Fred Benth, Valery Kholodnyi and Almut Veraart) a third special year on Energy and Commodities at the Wolfgang Pauli Institute in Vienna, a unique initiative offering high level intensive mini-courses on quantitative methods in Commodity Research, held by leading experts, free of charge to participants.