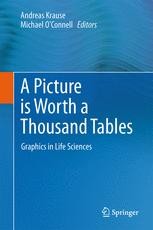 A Picture is Worth a Thousand Tables

This book is devoted to the graphics of patient data: good graphs enabling straight¬forward and intuitive interpretation, efficient creation, and straightforward interpretation. We focus on easy access to graphics of patient data: the intention is to show a large variety of graphs for different phases of drug development, together with a description of what the graph shows, what type of data it uses, and what options there are. The main aim is to provide inspiration in form of a “graphics cookbook.” Many graphs provide creative ideas about what can be done. The book is not intended to be technical. It introduces general principles of good visualization to make readers understand the concepts, but the main focus is on the creativity and usefulness: readers are enabled to browse through the book to get ideas of how their own data can be analyzed graphically.

Andreas Krause has 20 years of experience in the pharmaceutical industry. Holding a PhD in statistics and econometrics, his areas of expertise include modeling and simulation, also known as pharmacometrics, biostatistics and bioinformatics. He is director and lead scientist modeling and simulation in the department of clinical pharmacology at Actelion Pharmaceuticals Ltd in Allschwil, Switzerland.

Graphics and visualization are a key element of his work as evidenced by a multitude of presentations and workshops. Recent publications include Interactive Visualization of Modeling Results for Effective Team Communication and Decision Making and Visualization Concepts for Modeling and Simulation (the former with Ronald Gieschke, the latter with Kevin Dykstra and Richard Pugh), both in the Journal of Clinical Pharmacology, 50(9), 2010.

Andreas Krause is co-author of The Basics of S-Plus (with Melvin Olson, Springer-Verlag, 1997-2005) and co-editor of Applied Statistics in the Pharmaceutical Industry (with Steve Millard, Springer-Verlag, 2001).

Michael O'Connell leads the Industry Analytics Group at TIBCO Software, developing analytic solutions across a number of industries including Life Sciences, Financial Services, Energy, Consumer Goods & Retail, and Telco, Media & Networks. He has been working on statistical software applications for the past 20 years, and has published more than 50 papers and several software packages on statistical methods. Michael has been particularly active in developing statistical graphics applications for review and reporting in clinical development, as has received several industry awards for his work in Life Sciences including recently being voted in the Top 100 Inspiring People in the Pharmaceutical Industry.  Michael did his Ph.D. work in Statistics at North Carolina State University and is an Adjunct Professor Statistics in the department.

“This one is a structured collection of papers on using graphics in the Life Sciences. … Many of the graphics use color well and are more interesting and attractive as a result. … Anyone carrying out statistical analyses in the Life Sciences would probably benefit from dipping into this book.” (Antony Unwin, Biometrical Journal, Vol. 57 (2), 2015)