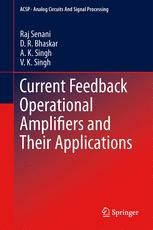 This book describes a variety of current feedback operational amplifier (CFOA) architectures and their applications in analog signal processing/generation. Coverage includes a comprehensive survey of commercially available, off-the-shelf integrated circuit CFOAs, as well as recent advances made on the design of CFOAs, including design innovations for bipolar and CMOS CFOAs.  This book serves as a single-source reference to the topic, as well as a catalog of over 200 application circuits which would be useful not only for students, educators and researchers in apprising them about the recent developments in the area but would also serve as a comprehensive repertoire of useful circuits for practicing engineers who might be interested in choosing an appropriate CFOA-based topology for use in a given application.

Raj Senani received B.Sc. from Lucknow University, B.Sc. Engg. from HBTI, Kanpur, M.E. (Honors) from MNNIT, Allahabad and Ph.D. in Electrical Engg. from University of Allahabad, India. Dr. Senani became a Professor of Electronics and Communication Engineering at Delhi Institute of Technology, now known as Netaji Subhas Institute of Technology (NSIT), New Delhi, in 1990 and has held the positions of Head and Dean of various Departments, as well as Institute Director, a number of times since then. He is currently functioning as the Director of NSIT since October 2008. His areas of interest are Analog Integrated Circuits and Signal Processing and he has authored/co-authored 135 papers in International Journals. He is serving as an Associate Editor for Circuits, Systems and Signal Processing, since 2003. Professor Senani is a Senior Member of IEEE and was elected a Fellow of the National Academy of Sciences, India, in 2008. He is the recipient of Second Laureate of the 25th Khwarizmi International Award for the year 2012.

D. R. Bhaskar received B.Sc. from Agra University, B. Tech. from IIT, Kanpur, and M.Tech. from IIT, Delhi and Ph.D. from University of Delhi. Dr. Bhaskar is a full Professor of ECE at Jamia Millia Islamia, New Delhi, since January 2002 and has served as the Head of the Department of ECE during 2002-2005. Professor Bhaskar is a Senior Member of IEEE. His areas of interest are Analog Integrated Circuits and Signal Processing and he has authored/co-authored 62 papers in International Journals.

A. K. Singh received M.Tech. in ECE from IASED and Ph. D from NSIT, University of Delhi. Dr. Singh is a full Professor of ECE at ITS Engineering College, Greater Noida, UP, India since 2009. His area of interest is Analog Integrated Circuits and Signal Processing and he has published 36 papers in International Journals.

V. K Singh obtained B.E. and M. E. degrees in EE from MNNIT, Allahabad and Ph.D. in ECE from UPTU, India. He served as Head of the ECE Department at IET Lucknow, India, between 1986-1988 and 2007-2010. He is a full Professor at IET Lucknow since 2004 and Dean of R&D since 2007. His areas of research are Analog Integrated Circuits and Signal Processing and he has authored/co-authored 16 research papers in international Journals.