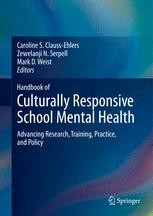 Schools across the United States – as well as much of the world – are experiencing widespread change. Students are more diverse ethnically, academically, and emotionally. More attention is being paid to abuse and neglect, violence and bullying, and the growing inequities that contribute to student dropout. Within this changing landscape, cultural competence is imperative for school-based professionals, both ethically and as mandated by educational reform.

The Handbook of Culturally Responsive School Mental Health explores the academic and behavioral challenges of an increasingly diverse school environment, offering workable, cost-effective solutions in an accessible, well-organized format. This timely volume updates the research on cultural competence in school-based interventions, describes innovative approaches to counseling and classroom life, and demonstrates how this knowledge is used in successful programs with children,  adolescents, and their families. Populations covered range widely, from African American and Asian American/Pacific Islander families to forced migrants and children who live on military bases.

By addressing issues of training and policy as well as research and practice, contributors present a variety of topics that are salient, engaging, and applicable to contemporary experience, including:

Caroline S. Clauss-Ehlers (aka CC) received her Ph.D. from Teachers College, Columbia University and is Associate Professor in the counseling psychology and school counseling programs at Rutgers, The State University of New Jersey.  She is a bilingual, practicing, licensed psychologist. Dr. Clauss-Ehlers is Editor of the Journal of Multicultural Counseling and Development.  Previous books she has authored/edited include:  Encyclopedia of Cross-Cultural School Psychology (Ed., Springer, 2010), Diversity Training for Classroom Teaching:  A Manual for Students and Educators (Springer, 2006), and Community Planning to Foster Resilience in Children (co-edited with M. D. Weist, Kluwer Academic Publishers, 2004).  Dr. Clauss-Ehlers is a 2004–2005 Rosalynn Carter Fellow for Mental Health Journalism and currently serves as an advisory board member for this program.  She is the Director of the Mental Health Advisory Board for the Jack Kent Cooke Foundation and serves on the boards of the International Alliance for Child and Adolescent Mental Health in Schools (INTERCAMHS) and The Resource for Advancing Children’s Health (REACH) Institute.  Dr. Clauss-Ehlers presented for the President’s New Freedom Commission on Mental Health about the need for population-based community intervention research with diverse youth. She has been a contributor to Spanish language media outlets such as Univision, Ser Padres (the Spanish language version of Parents magazine), and was a columnist for the Chicago Tribune’s Spanish language newspaper HOY for six years.

Zewelanji N. Serpell received her Ph.D. in Developmental Psychology from Howard University in Washington, DC, and is currently an Associate Professor in the Psychology Department at Virginia State University. She is the author of several publications and currently serves on the editorial board for the Journal of School Mental Health. She has also co-edited two books on school mental health—Advances in School-Based Mental Health Interventions (co-edited with S. Evans & M. D. Weist, Civic Research Institute, 2007) and this work, the Handbook of Culturally Responsive School Mental Health: Advancing Research, Training, Practice, and Policy (co-edited with C. S. Clauss-Ehlers & M. D. Weist). Dr. Serpell has an active research program focusing on educational innovations designed to enhance cognitive and social functioning among African American youth, supported over the years by grant funding from the National Science Foundation, Institute for Educational Sciences, American Psychological Association, and the Virginia Tobacco Settlement Foundation.

Mark D. Weist received a Ph.D. in clinical psychology from Virginia Tech in 1991 and is currently a Professor in the Department of Psychology at the University of South Carolina. He was on the faculty of the University of Maryland  School of Medicine (UMSM) for 19 years where he helped to found and direct the Center for School Mental Health (http://csmh.umaryland.edu), one of two national centers providing leadership to the advancement of school mental health (SMH) policies and programs in the United States.  He has led a number of federally funded research grants, has advised national research and policy oriented committees, has testified before Congress, and presented to the President’s New Freedom Commission on Mental Health. He helped to found the International Alliance for Child and Adolescent Mental Health in Schools (INTERCAMHS). Dr. Weist has edited four books and has published and presented widely in the SMH field and in the areas of trauma, violence and youth, evidence-based practice, and cognitive behavioral therapy. With colleagues from the Clifford Beers Foundation and the UMSM, he edits the journal Advances in School Mental Health Promotion (published now by Routledge of the Taylor & Francis Group).

“This book addresses the challenges facing school districts with diverse student populations, with the goal of integrating cultural approaches to counseling that will impact research and public policy as well. … The book looks at a broad range of topics and provides readers with ideas for training, intervention, and public policy. It should be in the libraries of all school counselors and administrators.” (Gary B. Kaniuk, Doody's Book Reviews, March, 2013)