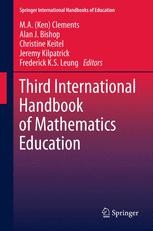 M. A. (“Ken”) Clements is Professor in the Department of Mathematics at Illinois State University. After teaching in schools for 10 years, he taught in three Australian universities (Monash, Deakin, and Newcastle), and at Universiti Brunei Darussalam (1997–2004). He has served as a consultant in India, Malaysia, PNG, South Africa, Thailand and Vietnam, and has been an editor for the three international handbooks on mathematics education (1996, 2003, 2012). He has written or edited 25 books and has authored many peer-reviewed articles. In 1996 he co-authored, with Nerida Ellerton, a UNESCO book on mathematics education research. He is honorary life member of both the Mathematics Education Research Group of Australasia (MERGA) and the Mathematical Association of Victoria (MAV).

Christine Keitel is Professor of Mathematics Education at the Freie University, Berlin, where she teaches prospective primary and secondary school teachers of mathematics. In the 1970s she worked as a research fellow at Max-Planck-Institute for Educational Research in Berlin on theoretical and practical approaches to curriculum development. In 1980, she became Director of a practice-oriented teacher education project at the Institute for Didactics of Mathematics in Bielefeld. She then moved to the Technical University of Berlin (TUB) and passed her Habilitation/venia legendi in the Mathematics Department of that University. In 1990 she obtained her professorship at Freie University.

Jeremy Kilpatrick is Regents Professor of Mathematics Education at the University of Georgia. He holds A.B. and M.A. degrees from the University of California, Berkeley, and M.S. and Ph.D. degrees from Stanford University. Before joining the Georgia faculty, he taught at Teachers College, Columbia University. He is a National Associate of the National Academy of Sciences and a Fellow of the American Educational Research Association, received a 2003 Lifetime Achievement Award from the National Council of Teachers of Mathematics, and received the 2007 Felix Klein Medal honoring lifetime achievement in mathematics education from the International Commission on Mathematical Instruction.

Frederick Koon-Shing Leung is Professor in Mathematics Education within the Faculty of Education of the University of Hong Kong. Born and raised in Hong Kong, he obtained B.Sc., Cert. Ed. and M.Ed. qualifications from the University of Hong Kong, and Ph.D. from the University of London Institute of Education. His major research interests are in the comparison of mathematics education in different countries, and in the influence of culture on teaching and learning. He is principal investigator of a number of major research projects, including the Hong Kong component of the Trends in International Mathematics and Science Study (TIMSS), the TIMSS Video Study, and the Learner’s Perspective Study (LPS). He was a member of the Executive Committee of the International Commission on Mathematical Instruction (ICMI) and the Standing Committee of the International Association for the Evaluation of Academic Achievement (IEA). He was awarded a Senior Fulbright Scholarship in 2003, and is a honorary professor of Beijing Normal University, Southwest University, and Zhejiang Normal University in China.