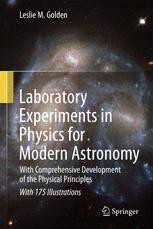 With Comprehensive Development of the Physical Principles

This book presents experiments which will teach physics relevant to astronomy. The astronomer, as instructor, frequently faces this need when his college or university has no astronomy department and any astronomy course is taught in the physics department. The physicist, as instructor, will find this intellectually appealing when faced with teaching an introductory astronomy course. From these experiments, the student will acquire important analytical tools, learn physics appropriate to astronomy, and experience instrument calibration and the direct gathering and analysis of data. Experiments that can be performed in one laboratory session as well as semester-long observation projects are included.

Leslie M. Golden obtained his undergraduate education at Cornell University in engineering physics, with distinction, while working summers performing planetary exploration simulation studies at the AstroSciences Center of the Illinois Institute of Technology. At Cornell he worked with Bruce Hapke on characteristics of the lunar surface and studied under his early mentor, Frank Drake. His Ph.D was earned at the University of California, Berkeley, where he performed research in a variety of areas, working with Leland Cunningham on software for the determination of the orbits of comets, Carl Heiles on the definitive 21-cm map of the galaxy, Harold Weaver on selection effects in studying the evolution of quasars, and W.H. McCrea on isotropy of radio source counts with position over the sky. His dissertation, a microwave interferometric study of the subsurface of Mercury, was performed under William J. Welch with the prototype Hat Creek interferometer. It was cited as one of only two dissertations for excellence in the year of completion by the Berkeley chapter of Phi Beta Kappa. The models he devised form the basis for thermophysical models of planetary surfaces still currently employed.

Dr. Golden obtained a National Research Council grant and continued interferometric studies of Mercury at the Jet Propulsion Laboratory and as a consultant at the Aerospace Corporation before receiving his academic appointment at the University of Illinois at Chicago.

Writing and public speaking allow Dr. Golden to share his enthusiasm. In addition to numerous technical articles, he was the award winning editor-in-chief of the Cornell Engineer magazine, and won the senior division of the Nicolaus Copernicus 500th Anniversary science-writing competition, the Eric Hoffer-Lili Fabilli Essay Award, and an award in the Griffith Observatory Science Writing Contest.

In demand as an authoritative and entertaining public speaker and lecturer, Dr. Golden, among many engagements, was selected by Royal Cruise Lines to be their on-board lecturer on the high seas during the 1986 apparition of Halley’s Comet, addressed the Adler Planetarium as the keynote speaker during the opening of their new wing, provided a lecture series on extraterrestrial life to the Field Museum of Natural History, and has been the only University of Illinois professor to be selected as a visiting faculty member on Semester at Sea through the University of Pittsburgh. He speaks widely to library, school, youth, and adult groups on various topics in astronomy.

Dr. Golden is one of a handful of individuals who is a member of both Tau Beta Pi, the engineering honorary society, and Phi Beta Kappa, the arts and sciences honorary society. He was also elected to Pi Delta Epsilon, the honorary journalism society.

“This textbook is different from many others in the field. … It was written to help students of astronomy to understand physics concepts in practical lab work. … I fully recommend this book. … The book’s content is suitable for many undergraduate physics courses where the content has reference to astronomy. As such, I recommend the book as very good supplementary material.” (Michael Vollmer, Physics Education, July, 2013)

"...I fully recommend this book. I learned or rediscovered quite a bit of interesting astronomy and I particularly liked the short descriptions of the physics background for the chosen activities." -Michael Volmer, Physics Education July 2013