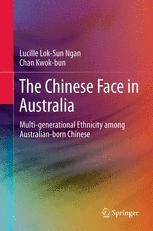 The Chinese Face in Australia

The book explains how multi-generational Australian-born Chinese (ABC) negotiate the balance of two cultures. It explores both the philosophical and theoretical levels, focusing on deconstructing and re-evaluating the concept of ‘Chineseness.’ At a social and experiential level, it concentrates on how successive generations of early migrants experience, negotiate and express their Chinese identity.
The diasporic literature has taken up the idea of hybrid identity construction largely in relation to first- and second-generation migrants and to the sojourner’s sense of roots in a diasporic setting somewhat lost in the debate over Chinese diasporas and identities are the experiences of long-term migrant communities. Their experiences are usually discussed in terms of the melting-pot concepts of assimilation and integration that assume ethnic identification decreases and eventually disappears over successive generations. Based on ethnography, fieldwork and participant observation on multi-generational Australian-born Chinese whose families have resided in Australia from three to six generations, this study reveals a contrasting picture of ethnic identification.

Lucille Lok-Sun NGAN is Honorary Lecturer of Sociology, University of Hong Kong and University of Macau; and Affiliated Research Fellow, Department of Social Sciences, Hong Kong Institute of Education. She was born in Hong Kong and raised in Australia. After receiving her doctorate degree in sociology from the University of New South Wales, she moved to Hong Kong with her family. Her research focuses on migration, Chinese diaspora, transnationalism, ethnic and race relations, identities, life course, gender and family. Her recent publications include 'Decentered transnational linkages: Chinese Returned Migrants in Hong Kong', in Transnational Migration Identifications in Asia: Living Intersections, edited by C. Pluss and K. B. Chan (Springer, 2012); 'An Outsider is Always an Outsider: Migration, Social Policy and Social Exclusion in East Asia.' with K. W. Chan, Journal of Comparative Asian Development (forthcoming); 'Chineseness: The Influence of Family and Marriage on the Identity of Long-established Australian-born Chinese', in International Handbook of Chinese Families, edited by K. B. Chan (Springer 2012); 'Generational Identities Through Time: Memories and Homelands of the ABCs’, in At Home in the Chinese Diaspora: Memories, Identity and Belonging, edited by A. Davidson and K. E. Kuah-Pearce (Palgrave Macmillan, 2008, 74-93); and ‘Living In-between’, Chinese Southern Diaspora Studies Journal (Vol. 2 No.1, 2008, 127-135).

Chan Kwok-bun is Founder and Chairman, Chan Institute of Social Studies (CISS). He is former Chair Professor and Head of Department of Sociology, and Director of David C Lam Institute of East-West Studies, Hong Kong Baptist University. Also former Head of Department of Sociology, National University of Singapore. Author of  25 books and about 100 essays in Chinese and English, Chan recently focusses on migration, identities, hybridity, transnationalism and cosmopolitanism, the family, and race and ethnic relations. Founded and edited Social Transformations in Chinese Societies, an official journal of the Hong Kong Sociological Association, of which he was President. Collects art and antiques, does public art exhibitions, and writes poetry. His Chan Institute has two arms: a think-tank of social studies and public policy, and an art gallery specializing in Southeast and Chinese art and antiques—all in an attempt to work with other like-minded people toward his goal of “Good Society, Good Life”.

“Ngan (Univ. of Hong Kong) and Chan (Hong Kong Baptist Univ.) skillfully engage the postmodernist elusiveness of race theory while contesting the essentialist assumptions that presuppose ethnicity and culture in this timely contribution to the complex project of examining the methodological and analytical strategies for understanding identity politics. … An important addition to migration studies and ethnic studies scholarship. Summing Up: Highly recommended. Upper-division undergraduates and above.” (A. Cho, Choice, Vol. 50 (5), January, 2013)

"...The Chinese Face in Australia...an excellent job of portraying and analyzing the challenges of "doing Chinese" in Australia and elsewhere, it clarifies key issues which surround the present sociological conceptions of ethnicity and social identities...The Chinese Face in Australia represents a real step forward in the consideration of ethnic identity....the book expresses the cautious hope that what its authors have to say about ethnicity goes further than addressing the case of the identified Australian-born Chinese."
May S. Partridge, Independent Scholar
Journal of Chinese Overseas, Vol. 10, No. 1, 2014

"The book has offered a rare and nuanced analysis of the psychology and sociology of Chinese men and women in a changing Australia. Apart from enriching our understanding of multi-generation identities among Chinese men and women born in Australia, the book has ably captured issues of race, ethnicity, and gender in Australia from the late nineteenth to early twentieth centuries, including the important post-World War II experiments with mass immigration and ensuing assimilation, integration and multicultural approaches to managing cultural diversity."
Pookong Kee, The University of Melbourne
Asian and Pacific Migration Journal, Vol. 23, No. 2, 2014