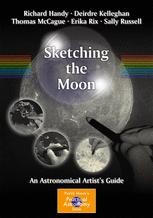 For anyone artistically inclined, observing the Moon and attempting to sketch or paint it can easily become a passion. The Moon presents a broad array of tone, texture, and form. Capturing this in a painting or sketch at the eyepiece of a telescope – or even with binoculars – develops observational skills, leaves a record of the observation, and can also be a delightful and rewarding pastime. However, the choice of media available is extensive (acrylic paint, oils, pen, charcoal, etc., and even computer art programs), and there is no existing text that fully explains all lunar sketching and painting techniques in each respective medium. This beautiful and graphically rich book fulfills this requirement. It presents detailed step-by-step instructions, in the form of illustrated tutorials for every major medium employed to represent the Moon. It also provides practical advice on how to sketch outdoors at night (not ideal conditions for an artist!).

This is easily the most extensive book on the subject of lunar art for amateur astronomers, particularly those observing through a telescope. The diverse features of the lunar surface will attract and entice readers to review the number of different media presented, exciting and inspiring them with the possibilities of learning to depict all of the fascinating aspects of Earth's very own satellite.

Richard Handy, principally ntoed for his lunar sketch work, studied Art and Astrophysics at the University of California Santa Cruz. He spends his cloudless evenings sketching the Moon and other celestial objects from his home in San Diego County, California. Rich very actively supports observational sketching and is a regular, enthusiastic contributor and supporter of a number of online astronomy forums. He is the Webmaster of Astronomy Sketch a Day (ASOD). Richard is principle co-author of Astronomical Sketching: A Step-by-Step Introduction (Springer, 2007).

Deidre Kelleghan lives in Ireland, is an artist and amateur astronomer. She also has a passion for experimentation in her approach to lunar, solar, and deep-sky sketching. Her work has been internationally acknowledged as unique. This overwhelming passion also feeds into public expression, as Deirdre is an avid informal educator. She relishes in developing drawing workshops and talks for children and adults. Deirdre is captivated by the explorations of interplanetary space probes. Currently she is working on a new and exciting phase of multi-media paintings, journeying through surfaces on other worlds, and bringing them to canvas.

Erika Rix live in Ohio and shares her love of astronomy with her husband, Paul. She is a member of the Association of Lunar and Planetary Observers and spends her spare time studying and sketching celestial objects at their home based PCW Memorial Observatory. She enjoys discussing sketching techniques with others and presents astronomial sketching workshops. Her sketches and articles have been included in various amateur astronomy publications and websites, including a beginner's guide article for Patrick Chevalley and Christian Legrand's Virtual Moon Atlas software. Erike is a co-author of Astronomical Sketching: A Step-by-Step Introduction  (Springer, 2007).

Sally Russell is a Research Chemist by profession and a Fellow of the Royal Astronomical Society. She is an avid amateur astronomer with a particular interest in solar and lunar observing, as well as beinga  keen and creative artist. Finally marrying her life-long astronomy and art pursuits together in 2003, she has subsequently developed and presented workshops on astronomical sketching, painted a number of astronomical commissions, and had sketches and articles published in various UK astronomy magazines and websites.

Thomas McCague has a passion for all things astronomical, including lunar, planetary, deep-sky observing, and telescope building since the 1950's. He entered college as a physics major and came out as a professional college educator in the biological sciences, a much better choice for gainful employment in the post Sputnik era. Thomas remains active as an adjunct professor of microbiology following 37 years of full-time teaching. For nearly a decade, he has been running a monthyl public viewing night at the nature study area of Moraine Valley Community College southwest of Chicago, Illinois. In the past, he served as the faculty advisor to the college's astronomy club when it was a dynamic organization. He is a member of the three national astronomy organizations and came to lunar sketching in earner just 6 years ago after meeting up with the co-authors of this work on-line.

All the authors have contributed to astronomical journals and magazines.

“This book is a companion to an earlier volume in the same series, Astronomical Sketching … . Each section offers a choice of techniques and materials, from relatively simple graphite on white paper to the more demanding procedures of pen and ink and stippling. In this respect the book will be of interest to both the complete novice and the more advanced artist. … It is thus a welcome addition to the literature.” (Bill Leatherbarrow, The Observatory, Vol. 132 (1229), August, 2012)