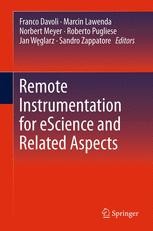 This book will focus on new Remote Instrumentation aspects related to middleware architecture, high-speed networking, wireless Grid for acquisition devices and sensor networks, QoS provisioning for real-time control, measurement instrumentation and methodology.  Moreover, it will provide knowledge about the automation of mechanisms oriented to accompanying processes that are usually performed by a human. Another important point of this book is focusing on the future trends concerning Remote Instrumentation systems development and actions related to standardization of remote instrumentation mechanisms.

Franco Davoli received the "laurea" degree in Electronic Engineering in 1975 from the University of Genoa, Italy. Since 1990 he has been Full Professor of Telecommunication Networks at the University of Genoa, where he is with the Department of Communications, Computer and Systems Science (DIST). From 1989 to 1991 and from 1993 to 1996 he was also with the University of Parma, Italy. His current research interests are in bandwidth allocation, admission control and routing in multiservice networks, wireless mobile and satellite networks and multimedia communications and services. He has co-authored over 250 scientific publications in international journals, book chapters and conference proceedings. He is a member of the Editorial Board of the following international journals: International Journal of Communication Systems (Wiley), Studies in Informatics and Control, Simulation – Transactions of the SCS. He was a guest co-editor of two Special Issues of the European Transactions on Telecommunications and of a Special Issue of the International Journal of Communication Systems. In 2004, he was the recipient of an Erskine Fellowship from the University of Canterbury, Christchurch, New Zealand, as Visiting Professor. He has been Principal Investigator in a large number of projects and has served in several positions in the Italian National Consortium for Telecommunications (CNIT). He was the Head of the CNIT National Laboratory for Multimedia Communications in Naples in the years 2004-2005, and Vice-President of the CNIT Management Board for the term 2005-2007; he coordinates the participation of the Consortium in the SatNEx European Network of Excellence and in the European project DORII, where he is a member of the Steering Group. Still with CNIT, he participated in European projects GRIDCC and RINGrid. Prof. Davoli was Program Co-Chair of TIWDC 2005 and General Co-Chair of the international Workshops INGRID 2007, INGRID 2008, and INGRID 2009, and he is co-editor of the related books published by Springer. He is a Senior Member of the IEEE.

Sandro Zappatore was born in Savona, Italy, in 1959. He received the laurea and Ph.D degrees in Electronic Engineering from the University of Genoa, Italy, in 1985 and 1990, respectively. In 1990 and 1991, he was awarded two scholarships from the Italian National Research Council (CNR) within the National Telecommunications Project. From 1992 to 2003, he was an Assistant Professor in Telecommunications at the Department of Communications, Computer and Systems Science (DIST) of the University of Genoa, Italy. Since 2004 he has been Associate Professor of  “Digital Transmission” and “Telematics” at the University of Genoa. His research interests are both in the area of signal processing, especially audio and video coding, and computer networks. His current research is devoted to Multimedia Network Applications. In this field, from 2000 to 2003, he was the technical manager of a national project, funded by the Italian Ministry of the Education, University and Scientific Research (MIUR), concerning the networked access and management of complex laboratories. Currently, he is interested in grid-based platforms for the control of remote laboratories. He was the general co-chair of the Tyrrhenian International Workshop on Digital Communications - Distributed Cooperative Laboratories, held in Sorrento, Italy in July 2005, and of INGRID 2007 and 2008. He was co-editor of the book entitled “Distributed Cooperative Laboratories - Networking, Instrumentation, and Measurements”, published by Springer in 2006, as well as of the two other books stemming from the INGRID Workshop Series. He has authored or co-authored numerous papers, appearing in International Journals and in international conference proceedings, and has been Principal Investigator in a number of projects. He currently participates in the DORII European project.

Jan Węglarz, Academician, Professor (Ph.D. 1974, Dr. Habil. 1977), in the years 1978-83 Associate Professor and then Professor at the Institute of Computing Science, Poznań University of Technology, member of the Polish Academy of Sciences (PAS), Director of the Institute of Computing Science, Poznań University of Technology and its predecessors since 1987, Director of Poznań Supercomputing and Networking Center, President and Scientific Secretary of the Poznań Branch of the PAS, Vice President of the Committee for Computer Science of the PAS, member of the State Committee for Scientific Research, Principal Editor of the Foundations of Computing and Decision Sciences, member of several editorial boards, among others Internat. Trans. Opnl. Res. and European J. Opnl. Res. Representative of Poland in the Board of Representatives of IFORS and in the EURO Council (President of EURO in years 1997-98). Member of several professional and scientific societies, among others the American Mathematical Society and the Operations Research Society of
America. Author and co-author of 11 monographs, 3 textbooks (3 editions each) and over 200 papers in major professional journals and conference proceedings. Frequent visitor in major research centers in Europe and the USA. Co-laureate of the State Award (1988) and the EURO Gold Medal (1991), laureate of the Foundation for Polish Science Award (2000).

Norbert Meyer received the M.Sc. degree in Computer Science from Poznań University of Technology in 1993, and the Ph.D. degree at the same university. Currently, he is Head of the Supercomputing Department in Poznań Supercomputing and Networking Center (http://www.man.poznan.pl). His research interests concern resource management in GRID environment, GRID accounting, data management, technology of development of graphical user interfaces and network security, mainly in the aspects of connecting independent, geographically distant Grid domains.  Dr. Meyer conceived the idea of connecting Polish supercomputing centres, a vision of dedicated application servers and distributed storage infrastructure. He is the co-founder of the CERT PIONIER organization (http://cert.pol34.pl). He was the workpackage leader and member of the Steering Group of the CrossGrid project (IST-2001-32243). He participated in several national projects concerning HPC technology; e.g., he has been co-author of the project entitled Creating an access environment for computational services performed by clusters of SUNs (co-founded by the State Committee for Scientific Research and SUN Microsystems), as well as of VLAB - High Performance Computing and Visualisation for Virtual Laboratory Applications. Norbert Meyer has been co-author of many project proposals, e.g., industry Grid solutions, eRegion (Technology Exchange and Information Services for Cross Border Regional Co-operation), Clusterix - National CLUSTER of LInuX Systems project. An example of a production Grid is a project proposal done in co-operation with IBM, which concerns the deployment of utility computing in Poland. He led an international project for GUI development for mobile network analyzers, done in co-operation with Tektronix (at Poznań University of Technology). He is also author and co-author of several reports and papers (60+) in conference proceedings and journals. Currently, the HPC infrastructure in PSNC consists of 3+ Tflops computational power, visualization systems and storage systems of 100+ TB connected mainly by a SAN network. Dr. Meyer was a member of program committees of international conferences related to high performance computing and grid computing, e.g., PPAM2005, PPAM2007, GAMW2005, CoreGRID Workshop on Grid Midleware, among others. He is a member of steering committees in EC projects (CoreGRID, BalticGrid), and coordinator of the RinGRID project. He currently coordinates the DORII project.

Marcin Lawenda graduated from Poznań University of Technology and received the M.Sc. in Computer Science (Parallel and Distributed Computation area) in 2000. He defended the Ph.D. thesis at the same university, Faculty of Computing Science and Management, Institute of Computing Science, in 2006. He currently works for Poznań Supercomputing and Networking Center on the team leader position. His research interests include parallel and distributed environments, scheduling and Grid technologies. He is also author and co-author of several reports and papers (30+) in conference proceedings and journals. ML project experience covers, among other aspects, the following positions: workpackage leader of a grid technology oriented national project under a research grant of the Ministry of Scientific Research and Information Technology (http://vlab.psnc.pl/), deputy manager in the RINGrid project (http://www.ringrid.eu/) and quality manager in DORII (http://www.dorii.eu/).

Roberto Pugliese was born in Gorizia, Italy, in 1964. He received the Laurea degree in Information Technology in 1990 at the University of Udine with the grade 110/110 cum laude.  From 1991 to 1993 he was Junior Researcher, responsible for software development at Salvagnini S.p.A. in Vicenza (Italy), a company operating in the field of industrial automation (flexible manufacturing systems).
Since 1994 he has been working at Sincrotrone Trieste S.C.p.A. where he is now leading the Scientific Computing team and the Technology Platform project cluster. From  December 1999 to January 2002 he has been a collaborator of NE&T S.r.l., a company operating in the field of Internet Technologies, with the role of responsible for Research and Development and, since January 2001, of Technical Director. Since Oct. 2002 he has a contract as Professor of E-Commerce at the University of Udine. His research interests include: Uncertain reasoning in Knowledge Based Systems, Image Processing and Machine Vision, Multisensorial Integration and Fusion, Intelligent Control Systems, Machine Learning, Virtual Collaboratories and Grid Technologies. He is a member of the IEEE Computer Society and also a member of the International Scientific Advisory Committee of the International Conference NOBUGS since 1998. Since October 2003 Roberto Pugliese has been a member of the International Committee for Future Accelerators (ICFA) in the working group of Remote Experiments in Accelerator Physics. He has been co-chair of the international Workshops INGRID 2007, INGRID 2008, and INGRID 2009, and he is co-editor of the related books published by Springer.
He has been involved in  many FP6 EU projects dealing with eScience and related technologies. His research interests are focused on grid technologies and their possible extensions to support complex problem solving. Starting in June 2006, till the project’s end in September 2007, he was the leader of the technical board of the GRIDCC project. He currently participates in the DORII project, where he is a member of the Steering Group.