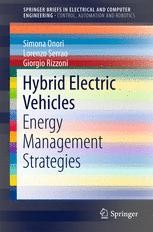 This SpringerBrief deals with the control and optimization problem in hybrid electric vehicles. Given that there are two (or more) energy sources (i.e., battery and fuel) in hybrid vehicles, it shows the reader how to implement an energy-management strategy that decides how much of the vehicle’s power is provided by each source instant by instant.

•presents a standard mathematical formulation of the optimal control problem;

•discusses different optimization and control strategies for energy management, integrating the most recent research results; and

•carries out an overall comparison of the different control strategies presented.

Chapter by chapter, a case study is thoroughly developed, providing illustrative numerical examples that show the basic principles applied to real-world situations. The brief is intended as a straightforward tool for learning quickly about state-of-the-art energy-management strategies. It is particularly well-suited to the needs of graduate students and engineers already familiar with the basics of hybrid vehicles but who wish to learn more about their control strategies.
Show all
About the authors

Simona Onori received her Laurea Degree, summa cum laude, (CSE) in 2003, her M.S. (ECE) in 2004, her Ph.D. (Control Engineering) in 2007, from University of Rome ‘Tor Vergata’, University of New Mexico, Albuquerque, USA, and University of Rome ‘Tor Vergata’, respectively. She has been Assistant Professor at Clemson University Automotive Engineering since August 2013 where she also holds a joint apportionment with the Electrical and Computer Engineering. She held visiting professor positions at University of Trento, Italy (2014) and Polytechnic of Orleans, France (2016), and she was invited lecturer at Beijing Institute of Technology, Beijing, (2015). Prior to joining the Clemson University faculty, Dr. Onori was a research scientist at the Center for Automotive Research at Ohio State University. Her background is in control system theory and her current research interests are in ground vehicle propulsion systems, including electric and hybrid-electric drivetrains, energy storage systems, and after treatment systems. She is chair of the IEEE CSS Technical Committee of Automotive Control, and vice-chair of IFAC Technical Committee of Automotive Control. She is the recipient of the 2016 Energy Leadership Award in the category Emerging Leader (for the Carolinas), the 2015 Innovision Award (South Carolina), 2012 Lumley Interdisciplinary Research Award by OSU College of Engineering and the TechColumbus 2011 Outstanding Technology Team.

Giorgio Rizzoni is the Ford Motor Company Chair in ElectroMechanical Systems and a Professor of Mechanical and Electrical Engineering at The Ohio State University. He received his BS, MS and PhD (all in Electrical and Computer Engineering) in 1980, 1982 and 1986 respectively, all from the University of Michigan. Since 1999, he has been the Director of the Ohio State University Center for Automotive Research (CAR), an interdisciplinary university research centre in the College of Engineering. His research interests are in future ground vehicle propulsion systems, including advanced engines, electric and hybrid-electric drivetrains, advanced batteries and fuel cell systems. He is a Fellow of SAE (2005), a Fellow of IEEE (2004), a recipient of the 1991 National Science Foundation Presidential Young Investigator Award, and of several other technical and teaching awards.

Lorenzo Serrao is a lecturer and researcher at IFP Energies nouvelles (Rueil-Malmaison, France), where he works on modeling and control of hybrid electric vehicles. He received his MS in Mechanical Engineering from Politecnico di Torino (Italy) in 2003 and his PhD in Mechanical Engineering from the Ohio State University (OSU) in 2009 with a dissertation on control strategies for HEVs. During his studies at OSU, he was affiliated with the Center for Automotive Research (CAR). His research interests include energy management of electric and hybrid vehicles, powertrain modelling and simulation, vehicle dynamics and modelling of battery aging.
The experience of the authors in the area modeling and control  of hybrid electric vehicles  is demonstrated by a rich body of literature delivered over a decade of research in this field.
Show all