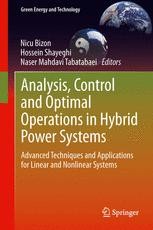 Advanced Techniques and Applications for Linear and Nonlinear Systems

The book’s text focuses on explaining and analyzing the dynamic performance of linear and nonlinear systems, in particular for Power Systems (PS) including Hybrid Power Sources (HPS). The system stability is important for both PS operation and planning. Placing emphasis on understanding the underlying stability principles, the book opens with an exploration of basic concepts using mathematical models and case studies from linear and nonlinear system, and continues with complex models and algorithms from field of PS. The book’s features include: (1) progressive approach from simplicity to complexity, (2) deeper look into advanced aspects of stability theory, (3) detailed description of system stability using state space energy conservation principle, (4) review of some research in the field of PS stability analysis, (5) advanced models and algorithms for Transmission Network Expansion Planning (TNEP),  (6) Stability enhancement including the use of Power System Stabilizer (PSS) and Flexible Alternative Current Transmission Systems (FACTS), and (7) examination of the influence of nonlinear control on fuel cell HPS dynamics.

The book will be easy to read and understand and will be an essential resource for both undergraduate and graduate students in electrical engineering as well as to the PhDs and engineers from this field. It is also a clear and comprehensive reference text for undergraduate students, postgraduate and research students studying power systems, and also for practicing engineers and researchers who are working in electricity companies or in the development of power system technologies. All will appreciate the authors' accessible approach in introduction the power system dynamics and stability from both a mathematical and engineering viewpoint.

Nicu Bizon received a five-year degree in electronic engineering from the University “Polytechnic” of Bucharest, Romania, in 1986, and the PhD degree in Automatic Systems and Control from the same university, in 1996. Firstly, he was in hardware design with the Dacia Renault SA, Romania. Currently, he is Professor with the University of Pitesti, Romania, being from 2012 the dean of the Faculty of Electronics, Communication and Computers. Also, he was head of University Research Department (2004-2008) and Executive Director of the Research Centre "Modeling and simulation processes and systems" (2008-2012), being manager of two research project in field of Green and Hydrogen Energy, and team’s member in other four projects in the same research field.

He is editor of six books in field of Green Energy, Hybrid Power Sources and Power Converters. His current research interests include the broad area of nonlinear systems, on both dynamics and control applied in the Green Energy field (www.researcherid.com/rid/B-8523-2011). He was authored or co-authored of several papers (over to 150) in journals (ISI web of knowledge or data base indexed) or international conferences proceedings.

He is general chair and proceedings’ Editor of the “Electronics, Computers and Artificial Intelligence - ECAI” Conference (www.ecai.upit.ro) and member of the Editorial/Technical Board of several international Journals and Conferences.

Naser Mahdavi Tabatabaei was born in Tehran, Iran, 1967. He received his B.Sc. and the M.Sc. degrees from University of Tabriz (Tabriz, Iran) and the Ph.D. degree from Iran University of Science and Technology (Tehran, Iran), all in Power Electrical Engineering, in 1989, 1992, and 1997, respectively. Currently, he is a Professor in International Organization of IOTPE. He is also an academic member of Power Electrical Engineering at Seraj Higher Education Institute (Tabriz, Iran) and teaches power system analysis, power system operation, and reactive power control. He is the General Secretary of International Conference of ICTPE, Editor-in-Chief of International Journal of IJTPE and Chairman of International Enterprise of IETPE all supported by IOTPE. He has authored and co-authored of six books and book chapters in Electrical Engineering area in international publishers and more than 130 papers in international journals and conference proceedings. His research interests are in the area of power quality, energy management systems, ICT in power engineering and virtual e-learning educational systems. He is a member of the Iranian Association of Electrical and Electronic Engineers (IAEEE).