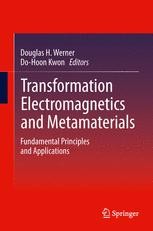 Transformation Electromagnetics and Metamaterials: Fundamental Principles and Applications presents a comprehensive treatment of the rapidly growing area of transformation electromagnetics and related metamaterial technology with contributions on the subject provided by a collection of leading experts from around the world. On the theoretical side, the following questions will be addressed: “Where does transformation electromagnetics come from?,” “What are the general material properties for different classes of coordinate transformations?,” “What are the limitations and challenges of device realizations?,” and “What theoretical tools are available to make the coordinate transformation-based designs more amenable to fabrication using currently available techniques?” The comprehensive theoretical treatment will be complemented by device designs and/or realizations in various frequency regimes and applications including acoustic, radio frequency, terahertz, infrared, and the visible spectrum. The applications encompass invisibility cloaks, gradient-index lenses in the microwave and optical regimes, negative-index superlenses for sub-wavelength resolution focusing, flat lenses that produce highly collimated beams from an embedded antenna or optical source, beam concentrators, polarization rotators and splitters, perfect electromagnetic absorbers, and many others.

This book will serve as the authoritative reference for students and researchers alike to the fast-evolving and exciting research area of transformation electromagnetics/optics, its application to the design of revolutionary new devices, and their associated metamaterial realizations.

Douglas H. Werner received the B.S., M.S., and Ph.D. degrees in electrical engineering and the M.A. degree in mathematics from The Pennsylvania State University (Penn State), University Park, in 1983, 1985, 1989, and 1986, respectively. He holds the John L. and Genevieve H. McCain Chair Professorship in The Pennsylvania State University Department of Electrical Engineering. He is the director of the Penn State Computational Electromagnetics and Antennas Research Laboratory as well as a member of the Communications and Space Sciences Lab (CSSL). He is also a faculty member of the Materials Research Institute (MRI) at Penn State. Prof. Werner has extensive experience in computational electromagnetics with an emphasis on the modeling/design of antennas (including conformal antennas and nanoantennas) and phased arrays (including ultra-wideband arrays) as well as frequency selective surfaces, metamaterials, and transformation electromagnetics/optics devices for a variety of RF, THz, IR and visible wavelength applications. He is a recognized authority on nature-inspired global optimization techniques (e.g. genetic algorithms, particle swarm, clonal selection, etc.) and their application to solving complex electromagnetic design problems.

Do-Hoon Kwon received the B.S. degree from Korea Advanced Institute of Science and Technology (KAIST), Korea in 1994, and the M.S. and Ph.D. degrees from the Ohio State University, Columbus, OH in 1995 and 2000, respectively, all in electrical engineering. He was a senior engineer at the Central R&D Center and Samsung Advanced Institute of Technology of Samsung Electronics, Co. in Korea from 2000 to 2006. During 2006–2008, he was a post-doctoral researcher with the Material Research Science and Engineering Center and the Department of Electrical Engineering of the Pennsylvania State University. In August 2008, he joined the Department of Electrical and Computer Engineering, University of Massachusetts Amherst, as an associate professor. He is affiliated with the Antennas and Propagation Laboratory and the Center for Advanced Sensor and Communication Antennas of the ECE department. His main research interests include antenna scattering theory, small/wideband antennas as well as phased array elements, frequency selective surfaces, metamaterials, cloaking, and device designs based on transformation electromagnetics/optics. He is a senior member of the IEEE.