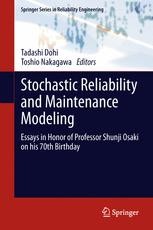 Essays in Honor of Professor Shunji Osaki on his 70th Birthday

In honor of the work of Professor Shunji Osaki, Stochastic Reliability and Maintenance Modeling provides a comprehensive study of the legacy of and ongoing research in stochastic reliability and maintenance modeling. Including associated application areas such as dependable computing, performance evaluation, software engineering, communication engineering, distinguished researchers review and build on the contributions over the last four decades by Professor Shunji Osaki.

Tadashi Dohi received the B.S.E., M.S. and Dr. of Eng. degrees from Hiroshima University, Japan, in 1989, 1991 and 1995, respectively. In 1992, he joined the Department of Industrial and Systems Engineering, Hiroshima University, Japan, as an Assistant Professor. He has been working as a Full Professor in the Department of Information Engineering, Graduate School of Engineering, Hiroshima University, Japan, since 2002. In 1992 and 2000, he was a Visiting Research Scholar in University of British Columbia, Canada and Duke University, USA, respectively, on leave of absence from Hiroshima University. His research areas include software reliability engineering, dependable computing, performance evaluation, reliability and maintenance engineering, and operations research. He is a Regular Member of ORSJ, JSIAM, IEICE, REAJ and IEEE. He published over 400 peer reviewed journal/conference papers in the above research areas. Dr. Dohi is serving as an Editorial Board Member of Asia-Pacific Journal of Operational Research,Journal of Risk and Reliability, Journal of Autonomic and Trusted Computing, International Journal of Reliability and Quality Performance, International Journal of Quality, Statistics, and Reliability, International Journal on Computer Science and Technology, etc. Dr. Dohi served as a Guest Editor of journal special issues in ACM Journal of Emerging Technologies in Computing, Communications in Statistics, Telecommunication Systems Journal, among others, and a General Chair of several international conferences such as AIWARM 2004--2008, APARM 2010--2012, WoSAR 2008-2010, MENS 2010, IEEE ISSRE 2011, IEEE UIC-ATC 2012, and as a Program Committee Member of several premium events such as IEEE ISSRE, IFIP/IEEE DSN, IEEE COMPSAC, IEEE SERE, IEEE PRDC.

Toshio Nakagawa already published more than 200 papers mainly on the subject of reliability theory in research journals, and has already published under the titles of "Maintenance Theory of Reliability" in 2005, "Shock and Damage Models in Reliability" in 2007, "Advanced Reliability Models and Optimum Policies" in 2008, and "Stochastic Processes with Applications to Reliability Theory" in 2012 from Springer. His research group in Nagoya, Japan, has continuously studied reliability theory and their applications since 1988, and has presented a large number of papers in reliability journals and at international conferences. Most papers have been written using some techniques and results of reliability and maintenance theory.