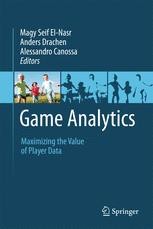 Maximizing the Value of Player Data

Developing a successful game in today’s market is a challenging endeavor. Thousands of titles are published yearly, all competing for players’ time and attention. Game analytics has emerged in the past few years as one of the main resources for ensuring game quality, maximizing success, understanding player behavior and enhancing the quality of the player experience. It has led to a paradigm shift in the development and design strategies of digital games, bringing data-driven intelligence practices into the fray for informing decision making at operational, tactical and strategic levels.

Game Analytics - Maximizing the Value of Player Data is the first book on the topic of game analytics; the process of discovering and communicating patterns in data towards evaluating and driving action, improving performance and solving problems in game development and game research. Written by over 50 international experts from industry and research, it covers a comprehensive range of topics across more than 30 chapters, providing an in-depth discussion of game analytics and its practical applications.

Magy Seif El-Nasr is an Associate Professor in the Colleges of Computer and Information Sciences and Arts, Media and Design, and the Director of Game Educational Programs and Research at Northeastern University, and she also directs the Game User Experience and Design Research Lab. Dr. Seif El-Nasr earned her Ph.D. degree from Northwestern University in Computer Science. Magy’s research focuses on enhancing game designs by developing tools and methods for evaluating and adapting game experiences. Her work is internationally known and cited in several game industry books, including Programming Believable Characters for Computer Games (Game Development Series) and Real-time Cinematography for Games . In addition, she has received several best paper awards for her work. Magy worked collaboratively with Electronic Arts, Bardel Entertainment, and Pixel Ante.

Anders Drachen is a veteran Data Scientist, currently operating as Lead Game Analyst for Game Analytics (www.gameanalytics.com). He is also affiliated with the PLAIT Lab at Northeastern University (USA) and Aalborg University (Denmark) as an Associate Professor, and sometimes takes on independent consulting jobs. His work in the game industry as well as in data and game science is focused on game analytics, business intelligence for games, game data mining, game user experience, industry economics, business development and game user research. His research and professional work is carried out in collaboration with companies spanning the industry, from big publishers to indies. He writes about analytics for game development on blog.gameanalytics.com, and about game- and data science in general on www.andersdrachen.wordpress.com. His writings can also be found on the pages of Game Developer Magazine and Gamasutra.com.

Alessandro Canossa is Associate Professor in the College of Arts, Media and Design at Northeastern University, he obtained a MA in Science of Communication from the University of Turin in 1999 and in 2009 he received his PhD from The Danish Design School and the Royal Danish Academy of Fine Arts, Schools of Architecture, Design and Conservation. His doctoral research was carried out in collaboration with IO Interactive, a Square Enix game development studio, and it focused on user-centric design methods and approaches. His work has been commented on and used by companies such as Ubisoft, Electronic Arts, Microsoft, and Square Enix. Within Square Enix he maintains an ongoing collaboration with IO Interactive, Crystal Dynamics and Beautiful Games Studio.

“This is an astonishingly good book. It contains 800 pages of edited papers grouped into 34 chapters, focused on the data collected and analyzed by video game vendors for the purpose of improving video game player experience. … The chapters are well written and well referenced with abundant high-quality graphics. … This book will definitely be of interest to anyone involved in game analytics. It may very well become the standard desk reference for the discipline for the foreseeable future.” (J. M. Artz, Computing Reviews, July, 2013)