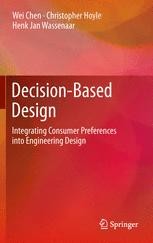 A rigorous framework of integrating the interests from both producer and consumers in engineering design,
Analytical techniques of consumer choice modelling to forecast the impact of engineering decisions,
Methods for synthesizing business and engineering models in multidisciplinary design environments, and
Examples of effective application of Decision-Based Design supported by case studies.

No matter whether you are an engineer facing decisions in consumer related product design, an instructor or student of engineering design, or a researcher exploring the role of decision making and consumer choice modelling in design, Decision-Based Design: Integrating Consumer Preferences into Engineering Design  provides a reliable reference over a range of key topics.

Wei Chen is the Wilson-Cook Chair Professor in Engineering Design at Northwestern University.  She is a Professor in the Department of Mechanical Engineering, with courtesy appointment in the Department of Industrial Engineering and Management, and is a faculty fellow of the Segal Design Institute.  She is also the Director of the interdisciplinary doctoral cluster in Predictive Science and Engineering Design (PSED) at Northwestern.  Wei Chen received her PhD in Mechanical Engineering from the Georgia Institute of Technology in 1995, her M.S. from the University of Houston in 1992, and her B.S. from Shanghai Jiao Tong University, China in 1988.  Before joining Northwestern University in 2003, she served at Clemson University (1995-1998) and the University of Illinois at Chicago (1998-2003). Directing the Integrated DEsign Automation Laboratory (IDEAL), her current research involves issues such as consumer choice modeling and enterprise-driven Decision-Based Design, simulation-based design under uncertainty, model validation, stochastic multiscale analysis and design, robust shape and topology optimization, and multidisciplinary optimization.   To promote Decision-Based Design as a new design paradigm that employs the classical decision theory and rigorous mathematical principles to preference modeling and design decision-making, during 1996 to 2004, Chen co-organized the National Science Foundation (NSF) sponsored Open Workshop on Decision-Based Design, a series of 18 face-to-face meetings and website workshops (http://dbd.eng.buffalo.edu).  Chen was the recipient of the 1996 NSF Faculty Early Career Award and the 1998 American Society of Mechanical Engineers (ASME) Pi Tau Sigma Gold Medal achievement award.  She was also the recipient of the 2005 Intelligent Optimal Design Prize and the 2006 SAE Ralph R. Teetor Educational award.  Chen is a Fellow of American Society of Mechanical Engineers (ASME) and an Associate Fellow of American Institute of Aeronautics and Astronautics (AIAA). She is an elected member of the ASME Design Engineering Division Executive Committee and an elected Advisory Board member of the Design Society.  Author of the book “Decision Making in Engineering Design” (co-edited with Lewis, K. and Schmidt, L.) and over 190 technical papers, Chen is an Associate Editor of the ASME Journal of Mechanical Design and serves as the review editor of Structural and Multidisciplinary Optimization.  In the past, she was an Associate Editor of the Journal of Engineering Optimization (07-09).

Christopher Hoyle is currently an Assistant Professor and the Arthur E. Hitsman Faculty Scholar in the area of Design in the Mechanical Engineering Department at Oregon State University. His current research interests are focused upon decision making in engineering design, with emphasis on the early design phase when uncertainty is high and the potential design space is large. His research contributions are to the field of Decision-Based Design, specifically in linking consumer preferences and enterprise-level objectives with the engineering design process. His areas of expertise are uncertainty propagation methodologies, Bayesian statistics and modeling, stochastic consumer choice modeling, optimization and design automation.  Hoyle received his PhD from Northwestern University in Mechanical Engineering in 2009, his Master’s degree in Mechanical Engineering from Purdue University in 1994, and his BS degree in General Engineering from University of Illinois at Urbana-Champaign in 1988. He served as an Adjunct Professor of Mechanical Engineering at Illinois Institute of Technology in 2009 and was a Summer Intern at the National Aeronautics and Space Administration (NASA) Ames Research Center in 2006. He was previously a Design Engineer and an Engineering Manager at Motorola, Inc. for 10 years before enrolling in the PhD program at Northwestern University.

Henk Jan Wassenaar is a Senior Scientist at Zilliant, Inc. specializing in developing pricing models for business to business markets for Fortune 500 companies.  He previously worked at J.D. Power and Associates conducting analysis of the automotive industry including an approach to incentives and demand modeling.  Wassenaar received his PhD from University of Illinois at Chicago in Industrial Engineering and Operations Research in 2003 and his Master’s degree in Mechanical Engineering from Delft University of Technology in 2000.