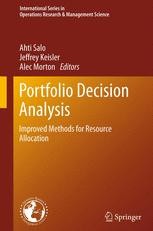 Portfolio Decision Analysis: Improved Methods for Resource Allocation provides an extensive, up-to-date coverage of decision analytic methods which help firms and public organizations allocate resources to 'lumpy' investment opportunities while explicitly recognizing relevant financial and non-financial evaluation criteria and the presence of alternative investment opportunities. In particular, it discusses the evolution of these methods, presents new methodological advances and illustrates their use across several application domains.

The book offers a many-faceted treatment of portfolio decision analysis (PDA). Among other things, it (i) synthesizes the state-of-play in PDA, (ii) describes novel methodologies, (iii) fosters the deployment of these methodologies, and (iv) contributes to the strengthening of research on PDA. Portfolio problems are widely regarded as the single most important application context of decision analysis, and, with its extensive and unique coverage of these problems, this book is a much-needed addition to the literature. The book also presents innovative treatments of new methodological approaches and their uses in applications.

The intended audience consists of practitioners and researchers who wish to gain a good understanding of portfolio decision analysis and insights into how PDA methods can be leveraged in different application contexts. The book can also be employed in courses at the post-graduate level.

"Resource allocation problems are ubiquitous in business and government organizations. Stated quite simply, we typically have more good ideas for projects and programs than funds, capacity, or time to pursue them. These projects and programs require significant initial investments in the present, with the anticipation of future benefits.   This necessitates balancing the promised return on investment against the risk that the benefits do not materialize. An added complication is that organizations often have complex and poorly articulated objectives and lack a consistent methodology for determining how well alternative investments measure up against those objectives.

I am pleased to see that [the editors] have succeeded in attracting a diverse collection of contributions from a distinguished set of authors. The editors do an excellent job of providing an overview of these contributions in their introductory chapter. I simply conclude by encouraging you to take up where these authors leave off, either by furthering the development of new theory and methods, or by putting these theories and methods to the test in real organizations struggling to make the best use of scarce resources."

Ahti Salo is Professor of systems analysis at the Systems Analysis Laboratory of the Aalto University School of Science. He obtained his M.Sc. and Dr.Tech. degrees at the Helsinki University of Technology in 1987 and 1992, respectively. He has worked as a senior researcher at the Technical Research Centre of Finland (VTT) and Nokia Research Center, and as a visiting professor at the London Business School, Université Paris-Dauphine and the University of Vienna. His research interests include portfolio decision analysis, risk management, efficiency analysis, and technology foresight. He has written well over 100 publications, including papers in leading journals such as Management Science, Operations Research and European Journal of Operational Research, and is currently an Associate Editor of Decision Analysis. He has directed numerous high-impact decision support processes such as the national foresight project FinnSight 2015. In 2010, he became the President of the Finnish Operations Research Society, served on the jury of the EURO Doctoral Dissertation Award, and began his work as the European and Middle East Representative on the INFORMS International Activities Committee.

Dr Alec Morton is Lecturer in Operational Research in the Department of Management at the London School of Economics and Political Science.  He teaches courses in decision analysis, simulation, and statistics, and his research interests are in the application of decision analysis to planning problems, especially in healthcare; in Multicriteria Decision Analysis and Multiobjective Optimization; in the normative foundations of health economics, and in games of attack and defence.  He is a graduate of the Universities of Manchester and Strathclyde, and before joining the LSE, worked at Singapore Airlines and the National University of Singapore.

“This edited volume on portfolio decision analysis is a successful effort to capture many perspectives on an important problem in the industry … . The chapters form a diversified set of perspectives that can aid both academics and practitioners. … offers a variety of practitioner-based instances that make it useful reading for portfolio analysts. It also has some valuable information and future directions for academics who are interested in exploring the challenges of portfolio decisions.” (Stelios Kavadias, Interfaces, Vol. 44 (1), January-February, 2014)