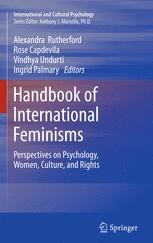 Although feminism has influenced psychological theory and practice across much of the world, their intersection has rarely been an easy one - particularly in post-colonial, and more recently, globalizing and transnational contexts.  The Handbook of International Feminisms offers a dynamic and nuanced picture of the diversity of feminism and its challenges around the world, both inside and outside of academia.

As seen in these pages, the very concept of ‘feminist psychology’ varies widely, as do the conditions under which it struggles or flourishes. Resistance to feminism may come from psychology in particular or the culture at large, in clashes between egalitarian ideals and longstanding cultural beliefs and practices that are inimical to women's interests. In some countries, the emergence of psychology and/or feminism is often seen as Western interference rather than welcome innovation. In others, activist psychologists are pressured to downplay aspects of their work or risk marginalization by the mainstream. Throughout this volume, the coverage is balanced between local context and global connection and commitment. Chapters analyze current and historical developments from:

As a comparative study, a call for new lines of communication, or a springboard for future interventions within psychology, the Handbook of International Feminisms is a significant volume for  psychologists of women and gender, clinical, social, and developmental psychologists, researchers in women’s studies, and upper-level students in women’s studies and behavioral science courses.

Alexandra Rutherford is Associate Professor of Psychology at York University in Toronto, Canada. Her primary appointment is to the History and Theory of Psychology Graduate Program, with cross-affiliations to the Women’s Studies and Science and Technology Studies Graduate Programs. As a historian of psychology her primary research interest is the uneasy relationship between psychology and feminism over the course of psychology’s history as an academic discipline. She is co-author of A History of Modern Psychology in Context (Wiley, 2010), and director of the Psychology’s Feminist Voices on-line archive and teaching project (see http://www.feministvoices.com/). She serves on the editorial boards of History of Psychology and Isis, and is a fellow of the American Psychological Association. In 2006 she was a recipient of the Feminist Mentoring Award from the Section on Women and Psychology of the Canadian Psychological Association. Rose Capdevila is a Lecturer at the Open University in the UK. Her research and publications focus on the construction of political and gender identities and the applications and implications of qualitative methodologies. In 2006, she co-edited (with Rhoda Unger) a Special Feature of Feminism & Psychology on ‘Political Psychology’ and in 2008 co-edited (with Jane Callaghan) a Special issue of Annual Review of Critical Psychology on ‘Globalisation, Migration and Asylum’. She is currently co-editing (with Marisela Montenegro and Heidi Figeroa) a Special Feature of Feminism & Psychology on ‘Feminisms and psychologies in the Latin American context’. She is also reviews editor for Feminism & Psychology and has served as an editorial consultant for the British Journal of Social Psychology. She is a committee member for the Psychology of Women Section of the British Psychological Society and recently served as co-chair for the APA Division 35 Task force on Feminist and Political Psychology. Vindhya Undurti is Professor of Psychology at Andhra University, Visakhapatnam, India. Her research concerns and publications are in the areas of women’s mental health, domestic violence, and the psychological dynamics of women’s political activism. She has contributed a review chapter on issues of gender in psychological research in India, commissioned by the Indian Council of Social Science Research [in G. Misra (Ed.), Psychology in India (Pearson, 2010)]. She is a past President of the National Academy of Psychology (India) and is a recipient of the Fulbright Visiting Lecturer Fellowship, USA (2004), the South Asian Visiting Scholarship at Oxford University (1998), and the Visiting Lecturer Fellowship at Eotvos Lorand University, Hungary (2001). She has recently in partnership with the International Center for Research on Women completed a research project on sex trafficking of women and girls. Ingrid Palmary is an Associate Professor at the University of the Witwatersrand in Johannesburg where she is based in the African Centre for Migration and Society. She coordinates a series of research projects within a programme on gender, violence and displacement. She has published book chapters and articles in the area of feminist methods in psychology, women in post-conflict reconciliation and gender and the international development industry. Her current research involves work on unaccompanied child migrants and sexuality as well as gender based persecution in the South African asylum system.

"...The handbook is an original and significant contribution to the international literature on women’s studies. It is not an easy read but it would be an accessible and important text for advanced students, scholars, and practitioners across a range of disciplines. Persons engaged in human rights education and activism would also find this book a useful resource. The book’s message is complex but overall, positively stirring. Feminism and psychology are powerful forces around the world. They have been variously engaged with, and estranged from each other, at different times in history, and depending on cultural context. Separately and together, they have made and continue to make critical contributions, ideologically and practically, to the lives of women and men everywhere."
Silvia Sara Canetto
Sex Roles, DOI 10.1007/s11199-013-0299-7
June 13, 2013