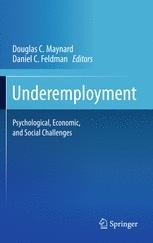 While joblessness is a signature problem during times of economic stress, underemployment —the lack of adequate, meaningful work—affects large numbers of workers even during relative prosperity. Historically overshadowed by unemployment, the pervasive and serious social problem of underemployment warrants

greater attention from scholars in a variety of disciplines.

Recognizing underemployment as a series of related phenomena (e.g., fewer hours of work, poor pay, jobs for which workers are overqualified), Underemployment: Psychological, Economic, and Social Challenges is the first book to provide an in-depth examination of the causes, dynamics, and consequences of underemployment and how the problem might be addressed. Experts from management, economics, psychology, and sociology present their unique approaches to understanding underemployment in terms of theory development, empirical findings, and implications for policy and practice. Some of the major topics covered include:

A comprehensive look at a most timely issue, Underemployment: Psychological, Economic, and Social Challenges will inform the work of researchers, scholars, managers, and policy makers dealing with underemployment issues for years to come.

Douglas C. Maynard is an Associate Professor in the Psychology Department at the State University of New York at New Paltz. He earned his Ph.D. in Industrial and Organizational Psychology from Bowling Green State University in 1998. He is primarily interested in studying the consequences of overqualification and other forms of underemployment and, more generally, the issues faced by marginalized workers. His work has appeared in such journals as the Journal of Organizational Behavior, Higher Education, Career Development International, Human Performance, and Organizational Research Methods.

Daniel C. Feldman is Associate Dean for Research and the Synovus Chair of Servant Leadership at the University of Georgia Terry College of Business.  He received his Ph.D. in Organizational Behavior from Yale University in 1976.  He is the author of six books and over 150 articles on career development and has served as Chair of the Careers Division of the Academy of Management.  He has also served as Editor-in-Chief of Journal of Management, Associate Editor of Human Resource Management, and Consulting Editor of Journal of Organizational Behavior.  Professor Feldman has won numerous research awards for his work on socialization, career indecision, layoffs, contingent employment, psychological contracts, and early retirement decisions.

“As this volume reveals, underutilized skills, too little pay, and too few work hours take their toll on financial, social, and emotional well-being. Editors Maynard (SUNY, New Paltz) and Feldman (Univ. of Georgia) have compiled a set of multidisciplinary articles on the topic of underemployment, authored by international scholars. … This volume is the most comprehensive work on this important subject. Summing Up: Highly recommended. Business managers, business and social science professors, and upper-division undergraduate and graduate students.” (G. E. Kaupins, Choice, Vol. 49 (4), December, 2011)

Underemployment was chosen as one of Choice Magazine's Outstanding Academic Titles of 2011, along with six other Springer titles. "Every year, Choice subject editors single out for recognition the most significant print and electronic works reviewed in Choice during the previous calendar year.  Appearing annually in Choice’s January issue, this prestigious list of publications reflects the best in scholarly titles and attracts extraordinary attention from the academic library community.  The 2011 feature includes 629 titles in 54 disciplines and subsections." (Outstanding Academic Titles, 2011. Choice, v.49, no. 05, January 2012.)