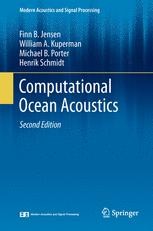 Since the mid-1970s, the computer has played an increasingly pivotal role in the field of ocean acoustics. Faster and less expensive than actual ocean experiments, and capable of accommodating the full complexity of the acoustic problem, numerical models are now standard research tools in ocean laboratories.

The progress made in computational ocean acoustics over the last thirty years is summed up in this authoritative and innovatively illustrated new text. Written by some of the field's pioneers, all Fellows of the Acoustical Society of America, Computational Ocean Acoustics presents the latest numerical techniques for solving the wave equation in heterogeneous fluid–solid media. The authors discuss various computational schemes in detail, emphasizing the importance of theoretical foundations that lead directly to numerical implementations for real ocean environments. To further clarify the presentation, the fundamental propagation features of the techniques are illustrated in color.

Computational Ocean Acoustics conveys the state-of-the-art of numerical modeling techniques for graduate and undergraduate students of acoustics, geology and geophysics, applied mathematics, and ocean engineering. It is also an essential addition to the libraries of ocean research institutions that use propagation models.

Finn B. Jensen received the M.Sc. and Ph.D. degrees from the Technical University of Denmark (TUD) in 1968 and 1971, respectively. From 1969 to 1973 he was Assistant Professor in the Department of Fluid Mechanics at TUD. Since 1973 he has been employed at the NATO Undersea Research Centre, La Spezia, Italy. He started as a research scientist developing numerical models of sound propagation in the ocean, then served for 17 years as Head of the Environmental Modelling Group at NURC, and since 1999 as a Senior Scientist and Project Leader for research related to propagation, reverberation, and target strength modeling.

William A. Kuperman received his Ph.D. in Physics from the University of Maryland and presently is a professor at the Scripps Institution of Oceanography, University of California, San Diego and the director of its Marine Physical Laboratory. Prior to coming to UCSD in 1993, he was at the Naval Research Laboratory and the NATO Undersea Research Centre in La Spezia, Italy. He has done experimental and theoretical research in an assortment of underwater acoustics and signal processing areas and has spent about three years at sea doing experiments.

Michael B. Porter graduated from Caltech in 1979, and received his Ph.D. from Northwestern University in 1984. He held civil service positions at the Naval Ocean Systems Center, the Naval Research Laboratory, and the NATO Undersea Research Centre in Italy. In academia he was a Professor at the New Jersey Institute of Technology, and held visiting positions at the Scripps Institution of Oceanography, and the University of Algarve (Portugal). In the commercial sector he was an Asst. Vice President and Chief Scientist at SAIC before joining HLS Research as its President and C.E.O. His research interests include propagation modeling, target scattering, communications, bio-acoustics, and environmental inversion.

Henrik Schmidt is Professor of Mechanical & Ocean Engineering at the Massachusetts Institute of Technology. He received his MS degree from The Technical University of Denmark in 1974, and his Ph.D. from the same institution in 1978. Following a post-doctoral fellowship at the Risoe National Laboratory in Denmark, he joined the NATO Undersea Research Centre in Italy in 1982, where he worked on computational ocean acoustics until he joined the MIT faculty in 1987. Professor Schmidt's research has focused on underwater acoustic propagation and signal processing, in particular on the interaction of sound in the ocean with seismic waves in the ocean bottom and the Arctic ice cover.