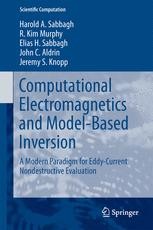 This volume will define the direction of eddy-current technology in nondestructive evaluation (NDE) in the twenty-first century. It describes the natural marriage of the computer to eddy-current NDE, and its publication was encouraged by favorable responses from workers in the nuclear-power and aerospace industries. It will be used by advanced students and practitioners in the fields of computational electromagnetics, electromagnetic inverse-scattering theory, nondestructive evaluation, materials evaluation and biomedical imaging, among others, and will be based on our experience in applying the subject of computational electromagnetics to these areas, as manifested by our recent research and publications. Finally, it will be a reference to future monographs on advanced NDE that are being contemplated by our colleagues and others. Its importance lies in the fact that it will be the first book to show that advanced computational methods can be used to solve practical, but difficult, problems in eddy-current NDE. In fact, in many cases these methods are the only things available for solving the problems.

The book will cover the topic of computational electromagnetics in eddy-current nondestructive evaluation (NDE) by emphasizing three distinct topics: (a) fundamental mathematical principles of volume-integral equations as a subset of computational electromagnetics, (b) mathematical algorithms applied to signal-processing and inverse scattering problems, and (c) applications of these two topics to problems in which real and model data are used. This will make the book more than an academic exercise; we expect it to be valuable to users of eddy-current NDE technology in industries as varied as nuclear power, aerospace, materials characterization and biomedical imaging. We know of no other book on the market that covers this material in the manner in which we will present it, nor are there any books, to our knowledge, that apply this material to actual test situations that are of importance to the industries cited. It will be the first book to actually define the modern technology of eddy-current NDE, by showing how mathematics and the computer will solve problems more effectively than current analog practice.

Dr. Sabbagh founded Sabbagh Associates in 1980 to solve problems and do research in the engineering and physical sciences. The company’s major thrust in recent years has been modeling and algorithm development in electromagnetic (eddy-current) nondestructive evaluation. This work has been supported by private industry and a number of government agencies, especially through the Small Business Innovation Research Program (SBIR). (With awards totaling $4M, the company is one of the largest recipient of SBIR funding in the State of Indiana.) Dr. Sabbagh has been the principal investigator for most of these projects.

Dr. Sabbagh and his brother, Dr. L. David Sabbagh, were awarded The Technical Cooperation Program (TTCP) Achievement Award for their work on "Verification of Field Flaw Models." TTCP consists of members of the defense departments of Australia, Canada, Great Britain, New Zealand, and the US. Of the nine TTCP awards made in 1992, "Verification of Field Flaw Models" was one of two awards received by Subgroup-P (Materials Technology). The research cited in the award is the basis of the commercial code VIC-3Dc , that is being developed and marketed by Victor Technologies, a company founded by Harold A. Sabbagh in 1998. He has published widely in the areas of computational modeling in engineering, and has presented a number of conference papers, especially in the area of electromagnetic (eddy-current) nondestructive evaluation, and has conducted short-courses in this area. He was elected a Fellow of the Applied Computational Electromagnetics Society in 2010.

Dr. Murphy is the author of the analysis portions of VIC-3D©, Victor Technologies’ volume-integral code for modeling problems in electromagnetic (eddy-current) nondestructive evaluation(NDE). He has published extensively in the area of numerical modeling with VIC-3D© in the aerospace, materials characterization and nuclear power industries.

Mr. Sabbagh is responsible for the analysis, design, and implementation of the graphical user interface in VIC-3D©. He is interested in modeling and designing extended functionality into the interfaces, and is using object-oriented analysis and design methods and tools for this endeavor.

Dr. Aldrin has nine years’ experience in nondestructive evaluation (NDE), specializing in numerical modeling, data analysis and design optimization. Recent projects include serving as a Visiting Scientist with the Air Force Research Laboratory while leading an AFOSR task on computational methods in NDE, designing automated defect analysis (ADA) software for NDE inspection techniques for industry, and consulting for NASA on signal processing methods for terahertz NDE data for spray-on-foam insulation. Dr. Aldrin has co-authored a number of refereed journal and conference publications, and received the 2006 Young NDT Professional Award by the American Society of Nondestructive Testing.