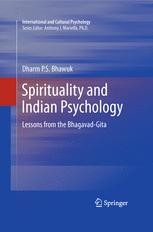 Lessons from the Bhagavad-Gita

In recent years, globalization, multiculturalism, and Western interest in Eastern thought have contributed to the growth of cross-cultural psychology. Paradoxically, however, while spirituality plays such a major role in non-Western cultures, it tends to occupy only a minor area of cross-cultural research.

Its roots in ancient philosophical texts such as the Bhagavad-Gita make Indian psychology not only an especially rich tradition and one deserving of close study, but also a template for how Western researchers can better understand indigenous spiritual perspectives. From this vantage point, Spirituality and Indian Psychology: Lessons from the Bhagavad-Gita provides accessible models for this understanding, from issues on the individual level (cognition, behavior, emotions, the self) to larger concerns such as intergroup relations and world peace, rarely-encountered concepts of work, bondage/liberation, and desire as well as the more familiar karma and dharma. In addressing the question of whether universals exist in psychology, this thought-provoking book:

Cross-cultural psychologists, sociologists, researchers in Indian psychology and culture—anyone involved in the continuing dialogue across the psychologies of the world and advancing the indigenous research agenda will find Spirituality and Indian Psychology a volume of rare interest and insight.

Dr. Dharm P. S. Bhawuk is Professor of Management and Culture and Community Psychology at the University of Hawaii at Manoa. He received his Ph. D. in Organizational Behavior from the University of Illinois at Urbana-Champaign. His research interests include cross-cultural training, individualism and collectivism, intercultural sensitivity, diversity in the workplace, indigenous psychology and management, culture and quality, culture and entrepreneurship, and political behavior in the workplace.

“The blurb on the dust jacket for Spirituality and Indian Psychology: Lessons From the Bhagavad-Gita succeeds admirably, noting that ‘globalization, multiculturalism, and Western interest in Eastern thought’ have led to increased interest in cross-cultural psychology. … has potential value for psychologists and other helping professionals. Those interested in the spirituality/psychology interface will find that this book grounds its spiritual references in the Bhagavad-Gita, helping Western readers understand how profoundly Indian thought has been influenced by this and other classics of Indian spiritual literature.” (Dennis Davidson, PsycCRITIQUES, Vol. 56 (36), September, 2011)