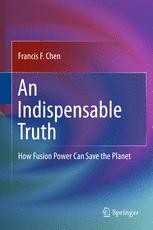 How Fusion Power Can Save the Planet

Both global warming and oil shortage can be solved by controlled fusion, a clean power source that will serve mankind for millennia.The idea of hydrogen fusion as well as its difficulties are presented in non-technical language to dispel the notion that fusion is always 50 years away. This book also summarizes the evidence for climate change and explains the principles of both fossil and "green" energy sources to show that fusion is the best alternative for central-station power in the near term as well as the far future.

Praise for An Indispensable Truth: How Fusion Power Can Save the Planet:

"In this study Professor Chen outlines the underlying physics, recent progress in achieving advanced plasmas and magnetic confinement, and hopes for the future. He recognizes the difficulties that remain in engineering a fusion reactor, but he remains optimistic regarding ultimate success, yet fearful of the consequences were we to fail."- James R. Schlesinger, former Chairman, Atomic Energy Commission; Director, Central Intelligence Agency; Secretary of Defense; and Secretary of Energy

"With lots of detail and examples, Chen brings the technical topic of fusion to life, making the book a great read for scientists and nonscientists alike."- Representative Rush Holt (D-NJ)

"Professor Chen has opened the door to energy survival for our globe. His insightful analysis makes the case for fusion energy, and he conveys both its complexity and its promise. This book is a must for all those who are concerned about the energy future of our species."- Raymond L Orbach, former Undersecretary for Science, U.S. Department of Energy

"This is an important book for anyone who wishes to understand the greatest challenge we face. Frank Chen makes the science of fusion and energy clear, compelling, and hugely enjoyable."- Steven Cowley, Director and CEO, Culham Centre for Fusion Energy, United Kingdom Atomic Energy Authority

Francis F. Chen's career in plasma physics has extended over five decades. His textbook Introduction to Plasma Physics has been used worldwide continuously since 1974. He is the only physicist who has published significantly in both experiment and theory and on both magnetic fusion and laser fusion. As an outdoorsman and runner, he is deeply concerned about the environment. Currently he enjoys bird photography and is a member of the Audubon Society.

“The ‘indispensable truth’ is that Chen … has written what may well be recognized as the definitive retrospective on the promise of endless supplies of cheap, clean nuclear energy from fusion, offering the prospect of realizing the promise at last. … It is stylishly written, designed, and illustrated to appeal to general readers … . Chen is in his comfort zone as he tells his story, and the indispensable truth is that it is just that–indispensable! Summing Up: Highly recommended. All levels/libraries.”­­­ (L. W. Fine, Choice, Vol. 49 (3), November 2011)

"With An Indispensable Truth: How Fusion Power Can Save the Planet, Frank Chen has provided a sweeping perspective on fusion energy. He covers everything from climage change to plasma instabilities. On climate change and energy, the view is best from 30 000 feet: The book provides a good high-level overview of the issues at stake...On fusion plasma physics, Chen's area of expertise, An Indispensable Truth provides an intuitive, up-close explanation of exciting recent advances and future challenges...An Indispensable Truth provides an exciting whirlwind tour of energy issues and technologies, with particular insight into fusion. Chen is correct to emphasize the tremendous progress that has been made in fusion research. ITER will produce hundreds of millions of watts of thermal energy from fusion, for periods of up to an hours. However, it remains for the world, and in particular the US, to decide if we will develop fusion into a practical energy source. We will need it." (Physics Today, Volume 65, Issue 2, February 2012)